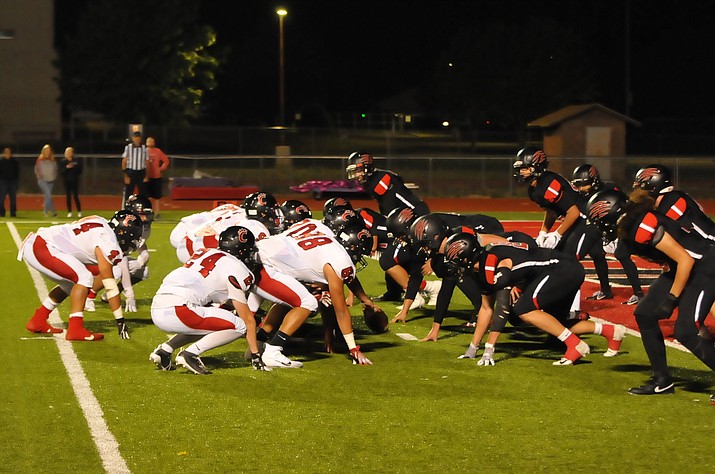 The former Ohio State football coach, who died in 1987, was a big proponent of running the football – so much so that his “3 yards and a cloud of dust” offense became the stuff of legend during his tenure with the Buckeyes, from 1951-1978.

And although you couldn’t describe Coconino’s offense precisely like that, the Panthers still love to run – and they employed a blistering ground game to their advantage in a 28-14 win over Bradshaw Mountain at Bob Pavlich Field.

“It’s different than anything we ever see,” Bears senior linebacker Daniel Gobiel said of the Panthers’ offense, affectionately known as the “Coco Bunch” because the linemen line up so closely together in formation. “It’s a difficult thing to process, but we’ve just got to come back, get stronger mentally, physically, and fix our injuries for next week.”

Coconino, with the victory on the Bears’ homecoming, remained unbeaten on the 2019 season at 5-0 and improved to 2-0 in the Grand Canyon region.

“Credit goes to the o-line, whether we’re passing or whether we’re running,” Panthers first-year coach Mike Lapsley said. “But those guys up front are doing their job, which allows the execution to take place.”

Bradshaw Mountain dropped to 3-3 and 1-1 with four games left on its regular-season schedule. Three of those contests will be played on the road.

Coconino passed only three times on Friday, as quarterback Jordan Lucero went 2 of 3 for 31 yards, tossing both balls to tight end Andy Ruiz.

Instead, the Panthers chose to rush it down the Bears’ defense’s throat. Junior running back Zach Bennett was the workhorse, registering 30 carries for 188 yards and three touchdowns of 2, 46 and 7 yards.

“I just want to thank my offensive line and my other wingback, Bailey McCauslin – he really set things up for me [Friday], took a little bit of pressure off of me, allowed me to break open,” Bennett said. “I was very thankful for my team [Friday].”

McCauslin followed, rushing the ball six times for 91 yards with a TD of 71 yards.

“It was just a really good offensive-line battle – when we get past the second level and there’s only one person to beat, it’s really hard not to praise the offensive line,” McCauslin said. “Everything pretty much worked that we game-planned for. We had a good week of practice and it really showed on the field [Friday].”

“They executed very well – they have a senior-based team and we have young guys,” Bears coach Chuck Moller said of Coco’s offense. “If one guy [of ours on defense] is out of position or takes the wrong step, we’re not there.”

Coconino’s defense wasn’t half bad either. It limited Bradshaw Mountain to 62 passing yards. Bears quarterback Josh Grant had 15 carries for 31 yards, running for TDs of 4 and 3 yards.

Bradshaw Mountain trailed 13-0 at the end of the first quarter before the hosts responded with a 10-play, 65-yard scoring drive, capped by Grant’s 4-yard TD run. But Coconino dominated time of possession for the rest of the first half, carrying a 13-7 lead into halftime.

Coconino didn’t pull away, though, until the end of the third quarter, when Bennett scored on a 46-yard TD run with 1:24 left, followed by a McCauslin’s 2-point conversion run for a 21-7 lead. Nearly mid-way through the fourth, the Panthers sealed it on Bennett’s third and final TD run from 7 yards out.

Bradshaw Mountain trimmed its deficit to 28-14 with 1:33 to go in regulation when Grant reached pay dirt on a 3-yard TD run that capped a 6-minute, 14-play drive. The Bears would recover an onside kick at the Coconino 31, but the Panthers’ defense held on a 4th-and-6 from the 17 to end it.

“We need to start showing up and play four quarters of hard-nosed football,” Moller said. “We have to become more disciplined.”

Bradshaw Mountain visits Flagstaff (2-3, 0-2 Grand Canyon), which lost its third straight Friday after a 2-0 start, at 7:30 p.m. Oct. 4 at Walkup Skydome in Flagstaff.