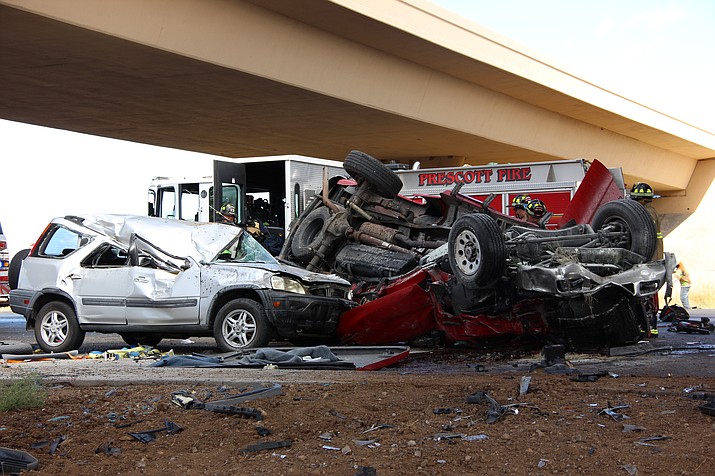 A red truck and silver compact SUV lie battered in the southbound lane of Highway 89 Friday afternoon, Sept. 27, 2019. The driver of the truck was declared dead at the scene. (Max Efrein/Courier)

One person is dead and another injured after a truck was driven off the Pioneer Parkway overpass above Highway 89 at about 1:45 p.m. Friday, Sept. 27.

Witnesses told Arizona Department of Public Safety (AZDPS) troopers that the truck was being driven erratically when it went into the median and through a cable barricade between the intersection’s two bridges, AZDPS spokesperson Bart Graves said.

After dropping about 20 feet and landing on southbound Highway 89, the truck struck an SUV and ended up on its hood, Graves said.

The driver of the truck was declared dead at the scene. The driver of the SUV — the only one in the vehicle — was transported to Yavapai Regional Medical Center with non-life threatening injuries.

Southbound Highway 89 was closed for several hours so police could investigate the crash.

Name of man killed in Hwy. 89 fatal crash Sept. 27 released
5-year-old pinned in crash, flown to Phoenix
Wrong-way driver makes it 36 miles on I-17 before forcibly stopped by police
UPDATE: PV man dead from May 17 crash on Highway 89A
Cordes Lakes woman dies in Highway 69 rollover