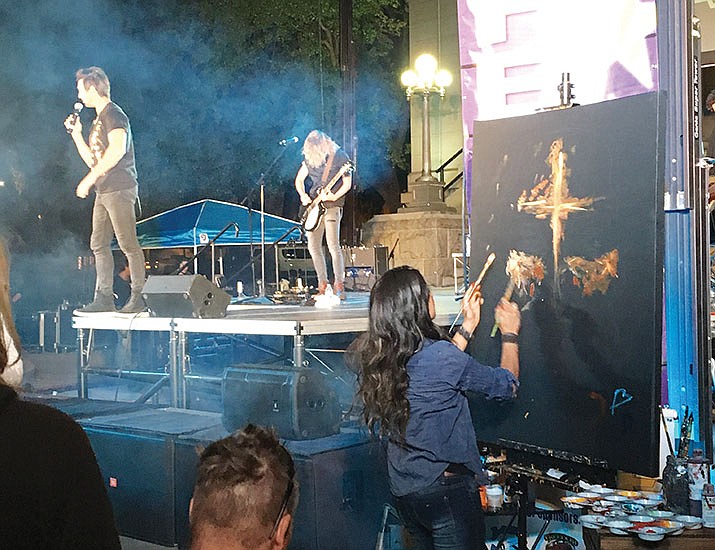 Seventh Day Slumber rocking at Hope Fest on the steps of the courthouse in Prescott. (Matthew Van Doren/Courier)

Emily Scott Robinson, one of Rolling Stones’ “10 New Country and Americana Artists to Watch in 2019,” is coming to the Elks theatre and Performing Arts Center for a Friday, Sept. 27, show in the third floor ballroom.

Having received critical acclaim from “Billboard,” “No Depression” and “American Songwriter” for the stories she’s captured on her new album, Robinson has traveled a quarter million miles, paying her dues along the dusty highways of America’s wild country in the RV she calls home.

Tickets for the 7 p.m. show are $15 and available online at www.folksessions.com. The Elks Theatre and Performing Arts Center is located at 117 E. Gurley St.

Tad Management is bringing its “Piano Men – Generations” show back to the Elks Theatre and Performing Arts Center for a 7 p.m. show Friday, Sept. 27. Two men on two pianos will perform the music of Billy Joel and Elton John.

Tickets are $25 for adults and $22 for seniors, available online at www.prescottelkstheater.com, by calling 928-777-1370 or at the door one hour prior to the performance.

The Elks Theatre and Performing Arts Center is located at 117 E. Gurley St.

Recently, the Steep Canyon Rangers have collaborated with some of Americana most distinctive musicians, including accomplished singer-songwriter and three time Grammy Award-winning producer for their 2018 release “Out in the Open.”

Tickets for the show start at $32 and are available online at www.ycpac.com. Yavapai College Performing Arts Center is located at 1100 E. Sheldon St.

The eighth annual Hope Fest, an event dedicated to serve veterans, active military members, first responders and the vulnerable of Yavapai County is Saturday, Sept. 28, from 10 a.m. to 9 p.m. at courthouse plaza. With a special opening ceremony at 11 a.m. This year’s theme is Extravagant Transformation.

Northern Arizona’s premier community outreach Festival, the event will also have three congressional Medal of Honor recipients, the Arizona delegation of the Hispanic Medal of Honor Society, the Arizona Rangers and the “Legacy of Valor” exhibit, a family fun zone, a car and motorcycle show, the HOPE Serves Community Resource Fair, a Harley Davidson Motorcycle drawing, presentations to Fallen Military and First Responder Families and the Fostering Hope Award and painter Vanessa Horabuena.