Backyard Gardener: The emerald ash borer is near 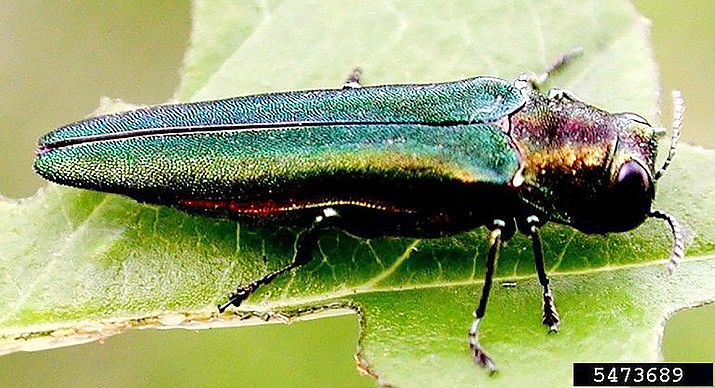 The emerald ash borer (Agrilus planipennis) is an invasive insect native to Asia. It has killed untold millions of ash trees (Fraxinus spp.) in urban, rural and forested settings in the Midwestern and Eastern U.S. This beetle was first identified in 2002 in southeast Michigan and Windsor, Ontario. As of September 2019, emerald ash borer (EAB) infestations were known to be present in 35 states as well as six Canadian provinces.

The nearest known location to Arizona is in Boulder, Colorado (first observed in September 2013). Surveys continue and additional infestations will be found as EAB continues to invade North America. It will eventually arrive in Arizona, where it will colonize and kill native ash trees and those planted in landscapes across the state. It is expected that emerald ash borer will ultimately kill almost every unprotected ash tree presently growing in North America.

Emerald ash borer is a species native to parts of eastern Asia that was accidentally introduced into North America, probably sometime in the 1990s. In its native range, EAB is not a very damaging insect where the ash species that grow there have evolved resistance to it and natural controls limit its injury.

Unfortunately, the species of ash that are native to North America have very little resistance to this new pest, and emerald ash borer has been devastating to ash trees growing here. EAB has been present in North America for several years and has already killed many millions of ash trees.

The adult beetle can fly and this is how it spreads naturally. Normally, the beetles will fly only short distances, staying in the near vicinity of the tree from which they developed. However, some will fly longer distances and, with the aid of favorable winds, it is possible that a few may fly several miles if the right conditions come together. This natural spread will cause the present outbreak areas of EAB to expand down drainages and across large areas where suitable host ash trees are present.

Emerald ash borers can also be spread with human assistance. Transport of firewood or other ash materials harboring live emerald ash borers is the way that this insect is carried over long distances (and probably how it originally reached the U.S.). This is undoubtedly the means by which it carried across the eastern plains and was introduced into Boulder, Colorado — an event that seems to have occurred at least four years prior to its actual detection. National quarantines of infested counties are in place to try and prevent this type of human-assisted spread of EAB.

Trees can recover from EAB injury — to a point. If one attempts to control EAB with insecticides, it is most likely to be effective if the ash tree is still relatively healthy. If trees have already sustained EAB injuries that have caused the leaf canopy to thin 30% to 50%, it is probably too late to save the tree. This is because most of the insecticides used for EAB control act systemically — the insecticide must be transported within the tree. A tree must be healthy enough to carry a systemic insecticide up the trunk and into the branches and canopy.

When EAB larvae feed, their galleries injure the phloem and xylem that make up the plant’s circulatory system. This interferes with the ability of the tree to transport nutrients and water, as well as insecticides. As a tree becomes more and more infested, the injury becomes more extensive. When damage has progressed too far, insecticides can no longer move within the tree in a manner to provide effective EAB control.

The advantages and disadvantages of each are included in the publication “Insecticide Options for Protecting Ash Trees from Emerald Ash Borer.” This and a current EAB distribution map are linked to the online version of this column (see URL below). Biological control methods are also being explored. These are mainly focused on insects that are predators of the EAB. We can be vigilant and protect a few trees; however, the ultimate outcome will certainly include huge losses of native and planted ash trees across Arizona. Like me, I’m sure you find this a very sad and troubling scenario.

Spread by trade and climate, bugs butcher America’s forests
Column: Insects can benefit your garden
12 birds you want in your yard
Insects: Which ones are truly pests?
Backyard Gardener: Recognizing and managing thrips