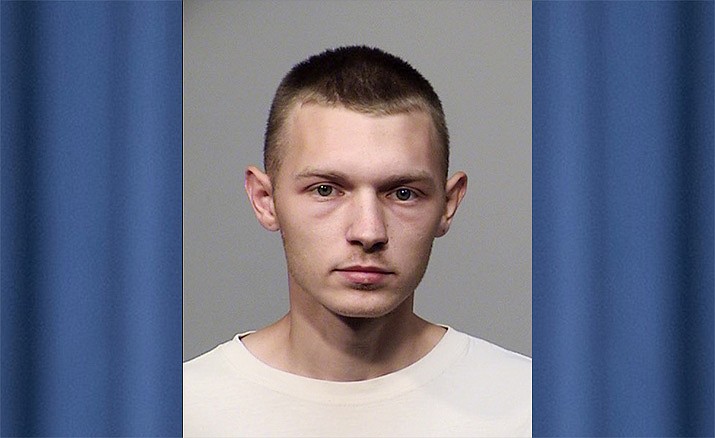 Damian Hayes, 23, from Mayer was arrested Sunday, Sept. 22, for allegedly committing a string of burglaries in the Bench Ranch area north of Spring Valley. (YCSO/Courtesy)

A man who is believed to have burglarized several homes in the Bench Ranch area north of Spring Valley in late August was caught allegedly trying to burglarize the same homes Sunday, Sept. 22, officials said Tuesday.

Just before 6 a.m. Sunday, deputies with the Yavapai County Sheriff’s Office (YCSO) were dispatched to a suspicious person call in the 15000 block of Upper Ridge Lane in the Bensch Ranch community, according to a YCSO news release.

They were aware the home had been burglarized before and searched the area at the back gate of Bensch Ranch. Parked outside the gate was a black Ford Ranger pickup. Inside the truck was drug paraphernalia, as well as an amplifier matching the description of an item stolen in the previous burglaries, according to the release.

The homeowner had captured video of a suspect with a security camera, which deputies reviewed. The video showed a six-foot white man wearing a camouflaged jacket with its hood pulled over his head.

The suspect appeared to test several door handles to see if they were locked, but never ended up entering the home. After reviewing the video, another homeowner in the area told deputies a man matching the same description was looking into his home, according to the release. This prompted police to put out a radio broadcast of the suspect’s description and last known location.

A short time later, a deputy spotted a man matching the description and chased after him on foot.

Another deputy standing on high ground saw the suspect run up a hill north of Bensch Ranch Road. The deputy parked at the west end of Rough Rider Ridge as the suspect was hiking through some brush. The deputy was able to get in front of the suspect and held him at gunpoint, according to the release. The suspect was cooperative and taken into custody.

The man was identified as 23-year-old Damian Hayes from Mayer. When deputies searched him, they found a flashlight stolen from a previous burglary, according to the release. The investigation resulted in the suspect’s connection to multiple burglaries in the area, YCSO reported. The investigation is ongoing.

Hayes was booked into the Yavapai County jail in Camp Verde and is facing a long list of charges, including multiple counts of burglary, criminal trespass, property theft and possession of drug paraphernalia.