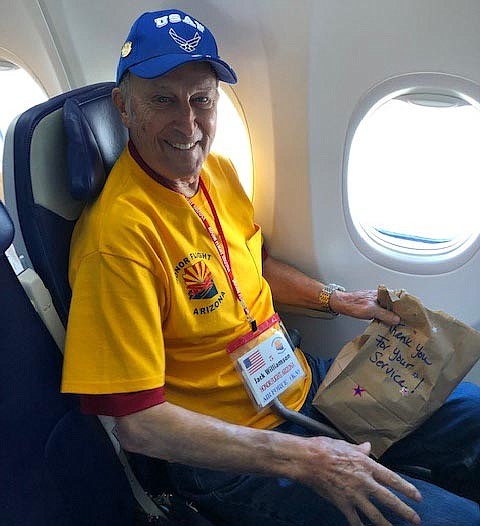 Jack Williamson is shown with his sack lunch on the Honor Flight, a trip for veterans to Washington, D.C., to view the military memorials. (Courtesy)

Jack Williamson, a Korean War veteran in Cordes Lakes, was one of the lucky veterans chosen for the Honor Flight.

For those who don’t know what it is, the organization takes veterans to Washington, D.C., to view the military memorials. They have been taking World War II veterans, and are now taking Korean War veterans, then will begin with Vietnam veterans. The trip is all-inclusive for the veteran. You can get more information about them at honorflightaz.org.

From the minute Jack stepped out of the vehicle at the airport, he was in the capable hands of people working with Honor Flight. They took his luggage and escorted him to a special waiting area where a continental breakfast was served. Jack’s group was divided into five groups of five people. The group was seated at a table so they could get to know each other even before boarding the plane. 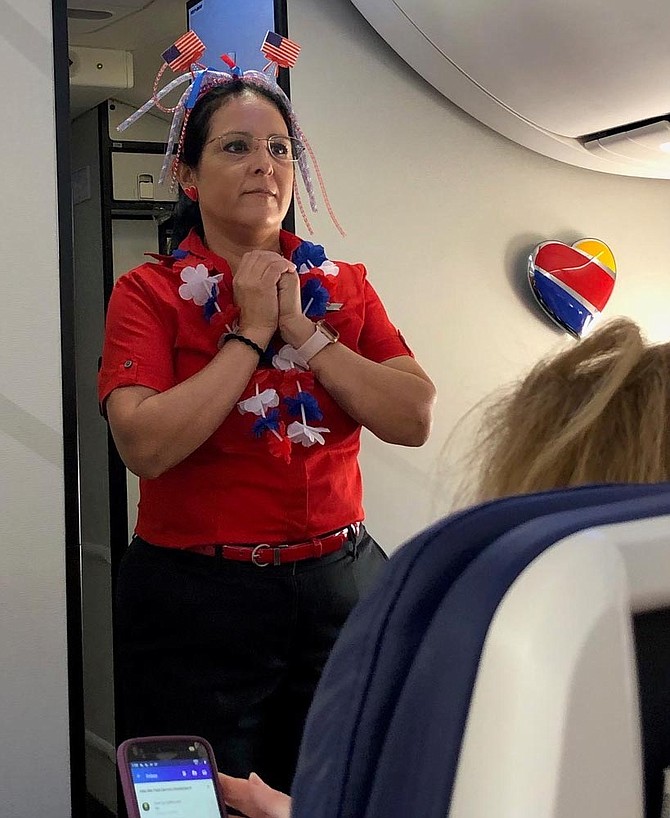 A flight attendant aboard the Honor Flight welcomes veterans aboard for their trip to Washington DC to visit the war memorials. (Courtesy)

And boarding the plane was an experience in itself. As the veterans moved from their staging area to the plane, music was played, songs were sung and the airport crowd stood on the sidelines applauding them. The veterans were boarded first, and the front of the plane is reserved for them. It is decorated with red, white and blue, and even the flight attendants were decorated. There was an Honor Guard on the tarmac saluting the plane. Trivia games were played on the way, a sack lunch was provided with “Thank You For Your Service” printed on the sack and the veteran’s every need was met. On arrival, they were taken to the hotel where they had dinner, and then to bed.

The next day, Wednesday, was the “Memorial” day. They started with the World War II Memorial, which is huge, according to Jack. Next was the Korean War and Vietnam memorials. Veterans that had walking difficulties had guardians that pushed them in wheelchairs. They were helped on and off the bus, had medics available in case of problems and were provided meals and snacks, along with plenty of water. 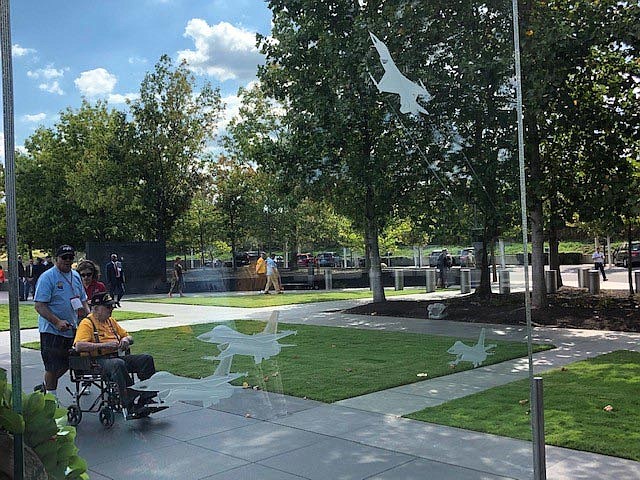 Veterans who could not walk as well as others were wheeled through the war memorials in wheelchairs as part of the Honor Flight. (Courtesy)

There was time at each memorial to get pictures, talk to others, read about the memorial and totally enjoy their visit. Stops were made at the Navy Memorial where Senator McSally met the bus and spent over an hour conversing with each veteran. Then it was on to the Marine and Air Force memorials. Jack is an Air Force veteran, and a brigadier general stopped to chat with him. The memorial is new and, according to Jack, is “very impressive with its tall spires and missing man formation.” There was one Seabee in their group, so they stopped at the Seabee Memorial. No one was left out and all were applauded wherever they went.

By the end of the day there was a bus loaded with very tired and very happy veterans. They went to Fort Myer for dinner and then to the hotel to literally crash.

The trip home was busy as they had “mail call” on the plane. Prior to leaving, friends and guardians were asked to have a thank you card sent to one of the volunteers that would bring them on the plane. Each veteran was given an envelope with their cards in it and enjoyed reading them as they travelled homeward. And again, on arrival, they were met with flags, songs and applause. Jack said, “That is truly a trip of a lifetime. You get to know other veterans, exchange stories, see every military memorial in an extremely organized manner.”

So veterans, check out the website and if you are a WWII or Korean War veteran, fill out the application and get ready for the time of your life.