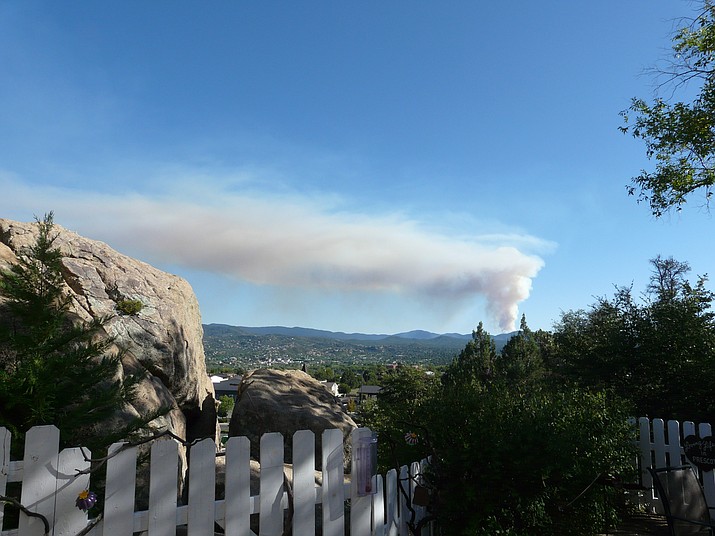 Prescott resident Joy Jordan, who lives about 3 miles north of the courthouse plaza, shared this image Sunday, Sept. 22, 2019, of smoke to the south of the city rising from a new fire. The blaze is near Lookout Mountain and the town of Walker. (Courtesy)

Click HERE to be directed to the latest story on these fires.

The Yavapai County Sheriff's Office has issued a CodeRed "GO" order calling for mandatory evacuation of the Lookout Mountain and Maverick areas because of the fire there.

The blaze topped 100 acres about 30 minutes ago, according to scanner traffic. The Prescott National Forest is expected to issue an update soon.

The CodeRed states: "This is a GO message from the Sheriff's Office. There is a wildfire threatening. A mandatory evactuation has been issued for residents located in the Look Out Mt/Maverick Mt areas. There is a significant danger to you, gather necessary items and go."

PRESCOTT - The Surprise Fire in the Granite Basin Recreation Area is approximately 210 acres with zero containment. However, favorable weather conditions allowed completion of burning operations along the west side of Granite Basin Road on Saturday, Sept. 21.

On Sunday afternoon, fire crews were deployed to Lookout Mountain near Walker for a new fire start, south of Prescott, said Cheyenne Warner of the Prescott National Forest. A helicopter is involved in the effort and crews are assessing the fire needs at this time. Dispersed smoke is visible from Prescott and Prescott Valley.

Watch dCourier.com and The Daily Courier for details as information becomes available.

Prescott National Forest officials stated Sunday morning that firefighters will remain on the scene of the Surprise Fire, monitoring and begin mopping up along Granite Basin Road. Resources assigned to the fire are three engines and one paramedic team.

The Surprise Fire poses no danger or threat to any residents or structures, according to a news release. Smoke may still be visible to motorists traveling in the area and residents of Prescott as interior fuels continue to burn.

The following closures are in place on the Surprise Fire for public and firefighter safety. Yavapai Campground will be closed until Tuesday, Sept. 24, 2019; along with Trail #349, Balancing Rock Trail and Trail #350, Surprise Spring Trail.

Granite Basin Road, Granite Basin Lake, Day-Use Areas and trails in the Granite Basin Recreation Area will remain open; however, forest visitors should expect delays and possible temporary area closures due to firefighters working on the roadway and smoke.

Forest Officials ask visitors to consider using alternative locations to recreate over the weekend to avoid impacts from smoke, and to allow firefighters to work safely. 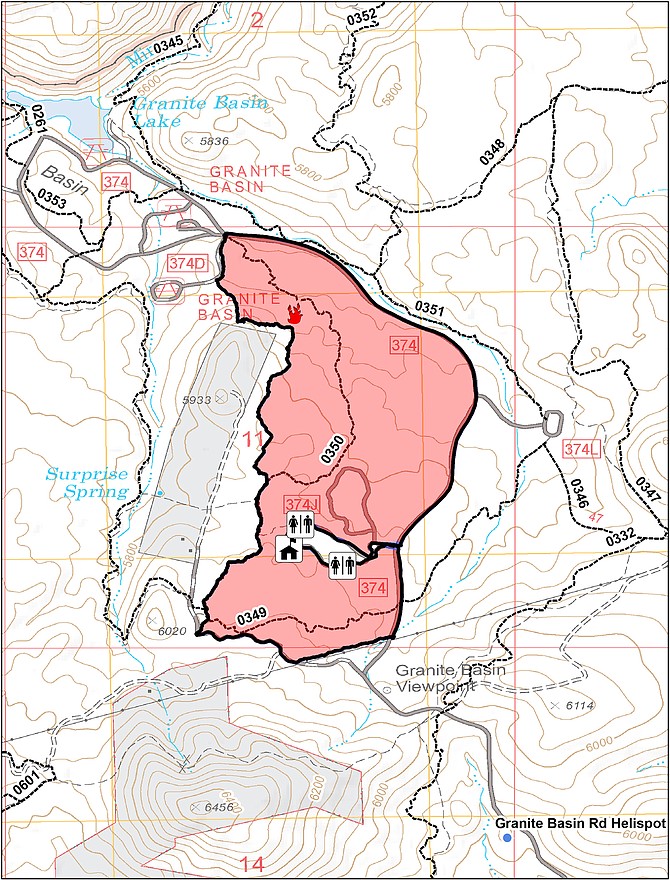 The Surprise Fire's boundaries in the Granite Basin area, on the west side of Prescott, as of Sunday, Sept. 22, 2019. (Prescott National Forest/Courtesy)