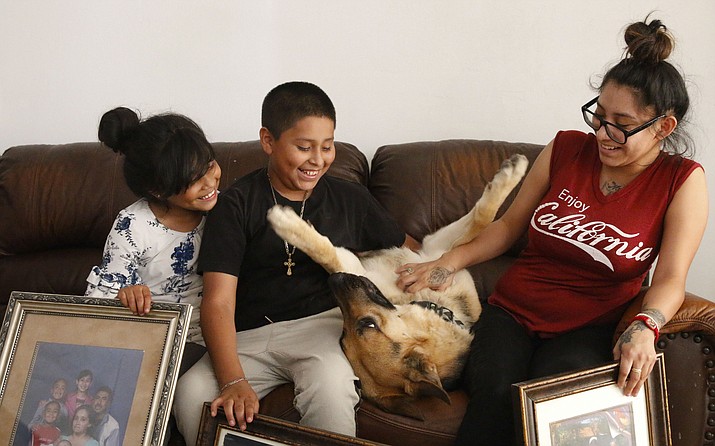 PHOENIX – Moving boxes clutter the hallway, while family portraits rest unhung against a stark white wall. In the living room, two couches are positioned near one another; they’re some of the only furniture in the home.

This little house in far west Phoenix is, in essence, a clean slate. It’s the beginning of a new chapter for a family that has been forced to navigate life without parental support over the last year.

Molina, 20, is big sister to Daniel, 16, Jose, 10, and Guadalupe, 8. After their mother, Gloria Jimenez Najera, was arrested in March on suspicion of identity theft, Molina has had to assume the role of primary caregiver to the children.

“There are times when my sister will be like, ‘I miss her,’ and then she’ll just start crying in the middle of the night,” said Molina, whose father had been deported to Mexico weeks before her mother’s arrest.

“You just have to be strong, even if you don’t feel strong. I mean it’s still hard to cope. It’s really hard.”

Molina and her siblings are far from alone in their struggle.

Now new data shows that these children are prone to psychological effects that may linger for years.

A study last month in JAMA Network Open, a journal published by the American Medical Association, found that parental incarceration was associated with a number of problems starting in early childhood and continuing into adulthood.

By age 16, 475 of those kids had a parental figure who had been incarcerated.

As children, that group had a higher prevalence of depression, behavioral problems and attention deficit hyperactivity disorder. As they reached adulthood, they were more likely to suffer from anxiety, social isolation, use drugs or themselves land behind bars.

Beth Gifford, lead author of the study and an assistant research professor at Duke University’s Sanford School of Public Policy, said the span of the study allowed researchers to account for other factors that might cause such conditions.

“Because we were looking for outcomes in young adulthood, we were able to control for … childhood adversity such as family socioeconomic status, exposure to child maltreatment and some other things that potentially would have impacted these outcomes,” she said.

Dr. William Copeland, a professor in the department of psychiatry and behavioral sciences at Duke University, managed the day-to-day data collection and said the findings point to a larger public health issue being fueled by high rates of incarceration.

“In the last 30 to 40 years, incarceration rates have gone up like crazy in the United States, which means that there are a lot more children that are growing up in households where they have an incarcerated parent,” Copeland said.

“Our message is public health. We need to come up with an alternative to these high incarceration rates – because it’s addressing one problem, but it’s creating other problems that are going to be with us for generations.”

Molina said she “didn’t know what to feel” in the moment because everything happened so quickly. Months later, she still struggles to describe what it was like seeing her mother escorted away.

“They found some papers that weren’t hers under her name – like Social Security that wasn’t hers,” she said.

Now she and her brothers and sister have been forced to grow up fast. Molina insists on being as honest as possible with them about the problems their family faces.