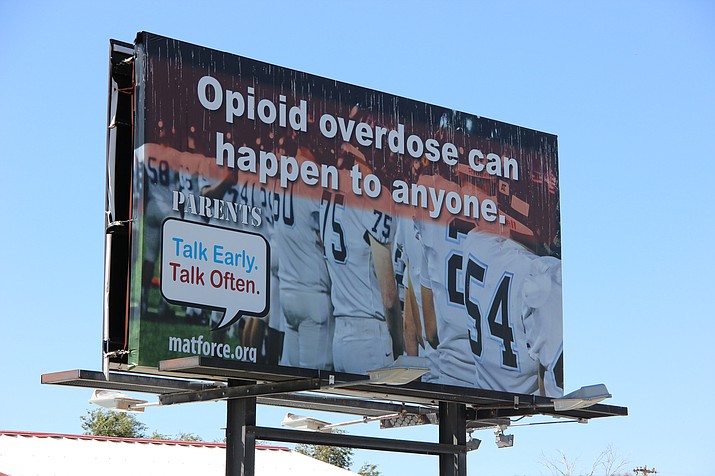 A billboard put up by MatForce near the intersection of Highway 69 and Highway 169 in Dewey. The billboard is part of MatForce’s effort to prevent overdose deaths in Yavapai County. (Max Efrein/Courtesy)

In 2018, there were 45 accidental and two undetermined drug-related deaths in Yavapai County.

These figures were gathered by the Yavapai County Overdose Fatality Review Board (OFRB) and officially released on Thursday, Sept. 19.

Since 2016, the OFRB has been studying overdose deaths in the county by taking a close look at a sampling of the decedents’ medical examiner’s reports, police reports, mental health histories, medical histories and legal histories. They also attempt to interview decedents’ families to gather additional information on such things as drug and alcohol use history, employment, education and family dynamics.

“A key component of what we’re doing is the family interview, because we need to learn a lot more than what’s in that medical examiner’s report or police report for us to really look at commonalities and work toward our ultimate goal of preventing these overdose deaths,” said Merilee Fowler, executive director of MatForce, the organization that established the OFRB.

For the 2018 report, 23 of the 47 cases were reviewed by the board and 13 families agreed to be interviewed.

Some of the most significant findings from the report were the following:

During a community presentation of the report’s results on Thursday, much of the focus was on what can be done moving forward to prevent further overdose deaths in the county.

Members of the law enforcement, medical and substance abuse treatment communities each provided recommendations, which were noted in the report.

Some of those suggestions were the following: