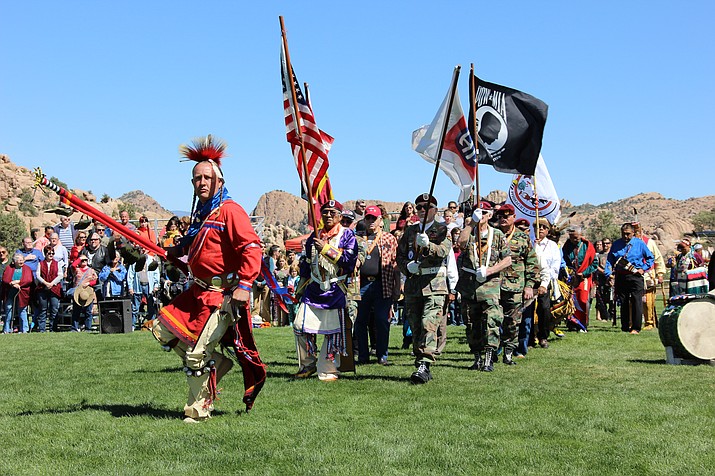 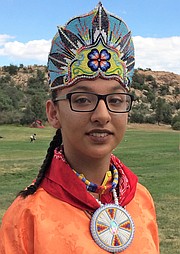 Nizhoni Dinehdeal, a resident of Glendale and Mesa of Seminole, Otoe, Navajo, Kaw, Apache and Cree tribes, displays her crown at the 12th annual Prescott Powwow at Watson Lake. A relative created the beadwork which was reworked by her stepmother from a design worn on the back to the current headdress. (Sue Tone/Courier)

Native American people are gathering at Watson Lake Park for the 13th annual Prescott Powwow and, as usual, the public is invited to be a guest.

For anyone who has never been to this event or other powwows though, Chairman Manuel Lucero IV said that what they are expecting might not be what they experience.

“A lot of folks think that it’s a show put on for entertainment purposes when it’s not,” Lucero said. “A powwow is where we gather to dance and to pray and to sing, make new friendships and rekindle old friendships and trade and to all the things we do at Native American Gatherings … if they keep that in mind, they’re going to have a fantastic time.”

Anyone who has questions shouldn’t be afraid to ask either, he said. Most people are willing to answer questions anyone might have, Lucero said.

This year’s gathering, does look fantastic, he said. Earlier in the week, the schedule was being finalized to make sure it included all the intertribal dancing was included along with making sure all powwow participants have a chance to do their specials and demonstrations.

“It’s going to be the same powwow everyone has come to know and love,” Lucero said. “We’re expecting about at least 10 drums and we are expecting six food vendors.”

The amount of food vendors at this year’s powwow has grown when compared to previous years, when at most there have been four, he said. There’s also more arts and crafts vendors this year, Lucero said. 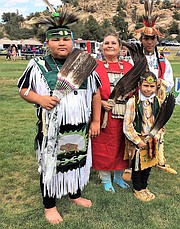 This year, the Head Man is Wewistima Tutsi from Second Mesa and the Head Boy is Mateo Haswood from Crownpoint, New Mexico. The Head Woman is Sunshine Roman from Chandler and the Head Girl is Cheyenne Edgewater from Leupp.

A major aspect of the Prescott Powwow is elders embracing the youth, Lucero said. If the next generation isn’t taught what the traditions of their heritages are or what their culture is, it will die, he said.

“Even when it was frowned upon by the government, native people dancing and doing our thing, we continued to do it anyway,” Lucero said. “Today we practice our freedom of religion just like everyone else and we invite the public to come down and take a look.”

For more information about the 13th annual Prescott Powwow, or for points of etiquette, visit www.prescottpowwow.org.