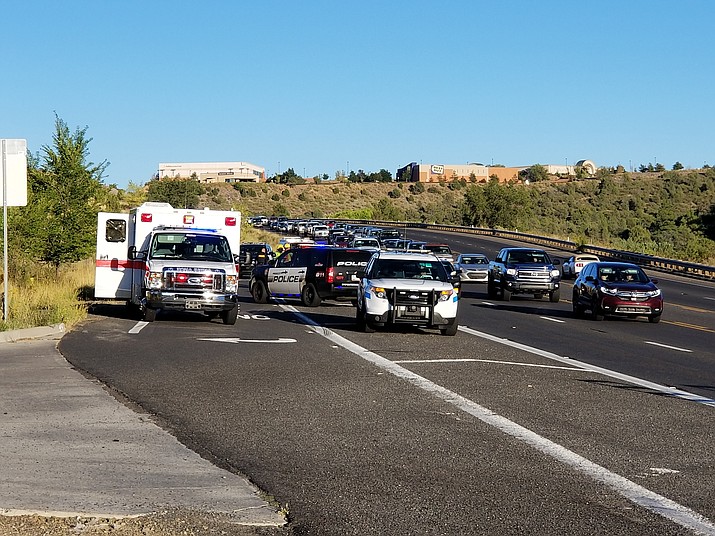 Multiple police vehicles and an ambulance sit parked at the scene of an accident on Highway 69 between Prescott Lakes Parkway and the Yavpe Connector on Thursday, Sept. 19, 2019. A man was hit by a sedan after attempting to cross Highway 69. (Max Efrein/Courier) 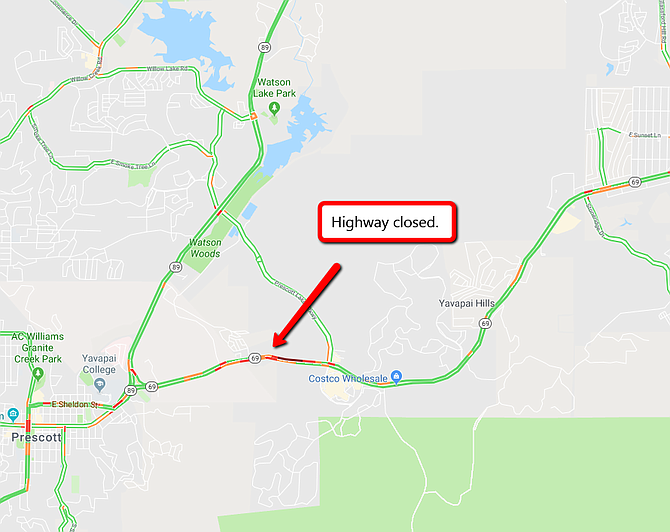 The Prescott Valley Police Department issued an alert at 5:10 p.m. Thursday, Sept. 19, stating that Highway 69 between Prescott Lakes Parkway and the Yavpe Connector is closed due to a serious crash. (ADOT Twitter account screenshot)

A man crossing Highway 69 was struck by a vehicle and was airlifted via helicopter to a Phoenix hospital with significant injuries Thursday afternoon, according to a Prescott Fire Department press release.

One northbound lane heading into Prescott was forced to close due to the accident on Highway 69, Prescott Fire spokesperson E. Conrad Jackson said in a phone interview with the Courier on Thursday night.

Multiple reports had both the northbound and southbound lanes on Highway 69 closed initially.

The pedestrian, a man in his 40’s, was attempting to cross Highway 69 east of Lowe’s Home Improvement when he was hit by a sedan, Jackson said in a statement.

“The driver of the sedan reported that they saw the man enter the roadway but was unable to avoid hitting him,” Jackson said.

The driver remained at the scene.

The pedestrian, who was found lying in the roadway when first responders arrived, was flown via a Native Air helicopter to Deer Valley Medical Center in Phoenix with significant injuries from the impact.

No further information on the patient was available.