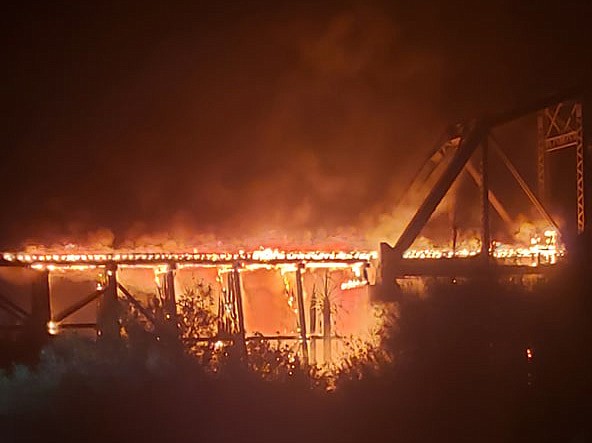 As of Sunday afternoon, small flames could still be seen and the bridge was smoldering. Fire crews remained on scene. The cause of the fire was not immediately available.

The 111-year-old bridge, which services the Arizona and California Railroad, caught fire sometime around 10:45 p.m. The fire burned the southern end of the bridge (the Arizona side) near the entrance to BlueWater Lagoon. The bridge deck and pilings were both burned, and vegetation along the banks of the Colorado River was burned as well.

Genesee & Wyoming Railroad Services spokesperson Michael Williams said in an email that the fire was still burning in hot spots as of Sunday afternoon, and railroad ties were being removed to keep the fire from spreading.

Genesee & Wyoming is the parent company of the Arizona & California Railroad.

“The railroad has begun mobilizing contractors and materials and expects a two-week outage,” Williams said. “But it’s early in the process and pending damage assessment. The railroad’s customers are all east of the bridge, so we are working to route traffic to the east.”

In the meantime, increased railroad traffic has been coming through Yavapai County, according to comments on social media. Representatives with Genesee & Wyoming and the Arizona & California Railroad did not respond to questions at press time. 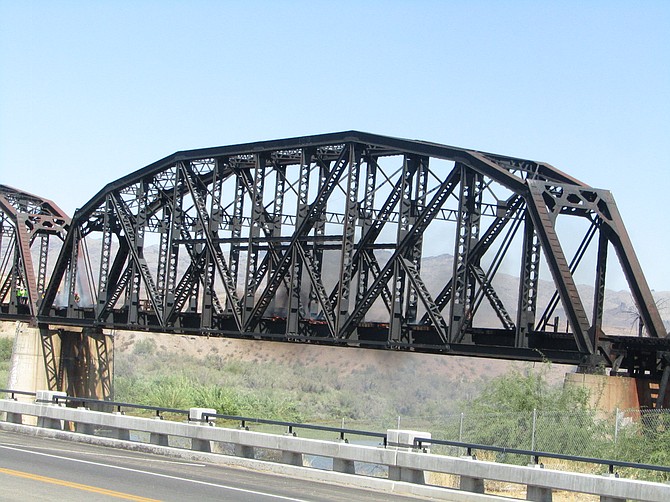 By late the next morning, Sept. 15, 2019, small flames were still visible and the bridge was smoldering as crews inspected the damage. (Parker Pioneer, John Gutekunst/Courtesy)

Williams said state and federal authorities are investigating the cause of the fire.

Buckskin Fire Chief Troy Maloney said the wooden support structures on the Arizona side of the bridge were heavily involved in fire and a brush fire had started below the bridge. These were quickly extinguished, but the fire had spread to railroad ties further out in the steel sections of the bridge.

On Sunday morning, Maloney said the decision was made to have Parker and Buckskin firefighters use chainsaws to remove ties to make a fire break. The other ties would be allowed to burn out. He said the bridge would be monitored by the railroad.

Maloney said motorists, boaters and others are advised to use caution when near the bridge. “People in the area are highly recommended to stay out from under the bridge as large pieces of burning railroad ties will continue to fall into the water,” Maloney said.

The A & C is a short line based in Parker.

The bridge was completed in 1908 as part of building the original Arizona & California Railway, which took place from 1903 to 1910. The line was a subsidiary of the Atchison, Topeka & Santa Fe, or as it was commonly known, the Santa Fe. The Santa Fe was looking for a shorter route between Phoenix and the big markets of California.

The railroad played a key role in the development of Parker. The Santa Fe needed an operations center for the line, and the most likely place was where the line would cross the Colorado River. This point was in the middle of the Colorado River Indian Reservation. Congress deeded one square mile of CRIT land to the railroad. This became the site of the Town of Parker.

The Today's News-Herald and Parker Pioneer are sister publications of The Daily Courier.

Days Past: Railroading in Central Arizona opened Southwest
Days Past: History along Route 89 from Chino Valley to Ash Fork: Part II
Some Early Travelers across Northern Arizona: Aubry, Sitgreaves, Whipple, Ives, and Beale
Explosives found in Colorado River near Parker campground
Days Past: How Arizona got on the map - Part 14