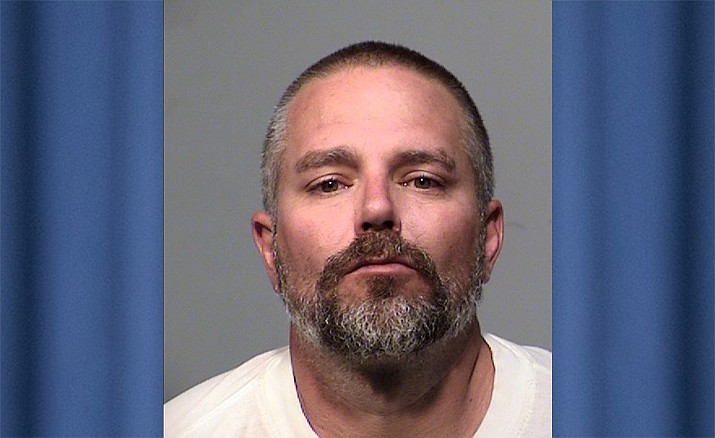 Christian Mattos was arrested on charges of driving under the influence (DUI) at .20 alcohol concentration or higher, aggravated DUI with two children in the truck (felony), and two counts of endangerment (felonies) on Saturday, Sept. 14, 2019, in Cottonwood. (YCSO/Courtesy)

Two young children were rescued from the back seat of their father’s truck in Cottonwood Saturday, Sept. 14, after authorities found the father passed out behind the wheel allegedly due to excessive drinking.

Concerned citizens had called 911 just before 4 p.m. that day to report seeing the man throwing beer cans out of his truck’s window and yelling at nearby people while parked at a convenience store on Western Dr., according to a Yavapai County Sheriff’s Office (YCSO) news release. It was also reported there were young children in the man’s truck.

The first YCSO deputy to arrive reportedly found 40-year-old Christian Mattos from Cottonwood asleep at the wheel of a running white Toyota pick-up truck. In the back seat of the truck were two boys, ages 2 and 3.

The deputy first turned off the truck and then checked the welfare of the children, “who were upset, but otherwise OK,” according to the release.

When more deputies responded, they woke Mattos up and could tell he was intoxicated, the release states.

A portable breath test indicated Mattos had a blood alcohol content of .21, which is well over twice the legal limit of .08.

Mattos was arrested on charges of driving under the influence (DUI) at .20 alcohol concentration or higher, aggravated DUI with two children in the truck (felony), and two counts of endangerment (felonies). He has since been released pending court action.

The children were turned over to their mother who had been called to the scene following Mattos’ arrest, according to the release.

“YCSO is thankful for the concerned citizen who called promptly after seeing the actions of Mattos while his kids were in the truck,” YCSO spokesperson Dwight D’Evelyn said. “The notification prevented further danger to the children and other motorists by allowing deputies to arrive before Mattos drove away.”