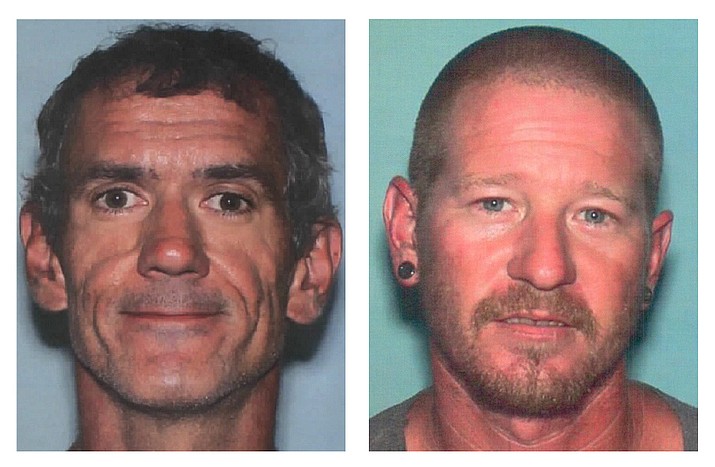 Authorities from the Yavapai County Sheriff’s Office issued two flyers late Monday, Sept. 16, 2019, as they search for two men in the county. Adam Predin, left, and Dustin Michael Morris have been missing since this weekend. Anyone with information about these two subjects are encouraged to call YCSO at 928-771-3260, or if you see them, call 911. (YCSO/Courtesy)

Flyers for two missing men were issued by the Yavapai County Sheriff’s Office late Monday night and authorities have asked anyone with information to come forward.

According to YCSO spokesperson Dwight D’Evelyn, it is unknown if the two men are acquainted.

The first man, 44-year-old Adam Predin, has been missing since Friday, Sept. 13, after he was last seen on a hike and got lost. His cell phone is reportedly turned off. He was last known to be wearing gray pants and carrying a backpack and shovel.

Predin is a 6-foot-3, 190-pound white male with short black hair and hazel eyes. He is from the Childs/Beasley Flats area. He also has a history of mental health issues and has asthma.

He may go by the name Tom Stevens.

Predin’s vehicle, a white Ford Expedition, has been located by YCSO deputies with no trace of the subject. He may also have been seen on Dugas Road based on a witness report.

He is a 5-foot-8, 185-pound white male with brown hair and blue eyes, and may have an earring in his right ear.

Morris is missing from Tempe, but may be in the area of Interstate 17 and Dugas in Yavapai County. There has been no physical sighting of Morris, according to D’Evelyn.

Morris is potentially wearing a white T-shirt and jeans, and may now have short hair or a shaved head. According to D’Evelyn, he may be despondent and his phone is showing as off.

YCSO urges anyone with any information about Predin or Morris to come forward and contact the Sheriff’s Office at 928-771-3260, and if you see either individual, call 911 immediately.