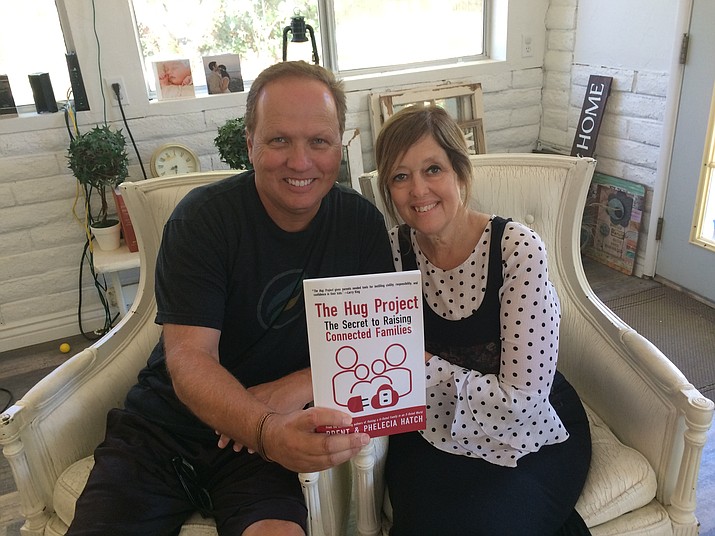 Brent and Phelecia Hatch, authors of “The Hug Project – The Secret to Raising Connected Families” plan to embark on a national tour to share philosophies on parenting they believe can combat other societal ills. (Nanci Hutson/Courier)

Brent and Phelecia Hatch are quick to say they are ordinary parents eager to help fellow parents navigate what can be as thrilling as a hot air balloon launch and agonizing as late night heartburn.

For certain, the Mormon couple who raised seven children in South Pasadena, California, and now have four grandchildren, want to be a force of hope so families don’t suffer the horror of a child’s suicide, or prolonged bullying that can lead to an assortment of mental health and addiction issues.

The Hatches moved to Prescott just over two years ago after leaving California six years ago.

With the governor’s recent appeal to fight suicide — and Yavapai County is touted as having the highest per capita rate in the state — the couple wants to fight back with a local, state and national movement rooted in practical child-rearing and family connection philosophies. They are preparing to launch a national tour, beginning in Prescott.

“Changing the world can feel like it’s too big and complicated,” Phelecia said. “But there are ways we can change the world in small ways with great love.”

Semi-retired, Brent Hatch works in real estate and Phelecia is his devoted partner.

When their children were young, Brent was a busy entrepreneur and Phelecia a stay-at-home mother — they raised their family in just a 700-square-foot house with one bathroom. The close quarters proved ideal for staying connected, the couple said.

“Our kids (their youngest is 18 and oldest 32) aren’t perfect, but if we didn’t put energy into our parenthood we’d have had a lot more issues,” said Brent Hatch, a fast talker as comfortable in his living room as he is on a stage in front of several hundred people.

Together, the Hatches penned two child-rearing/family connection books — “Raising a G-Rated Family in an X-Rated World” in 2006 and “The Hug Project, the Secret to Raising Connected Families” in 2017 that earned them top ratings on Amazon and interviews with the likes of Dr. Phil. The couple have been motivational speakers at parent conferences churches, and media all over the country.

With their “Hug Project” book, the Hatches include “The Hug Card,” a credit-card size inspiration Hatch helped create and sell in the mid-1990s.

The card shares the benefits of hugs: “No calories, no special equipment, makes a “good day better,” and “makes impossible days possible.”

Over the years, the Hatches received thousands of letters related to those little cards. One that still resonates was from a young woman who benefitted from a card handed to a stranger. The stranger hugged her at a time when she was depressed she contemplated suicide. The hug proved she was not alone — and she reconsidered.

Phelecia is clear their latest efforts are faith-based and practical.

“God always puts us closest to the ones who need us the most,” she said, noting that applies not only to families but communities. “A problem (be it suicide, opioid addiction or mental health struggles) is an opportunity in disguise.

The couple said they now just want to share their story, and their book, with a broader audience — at no charge.

“We feel we have to do something,” Hatch said.

The Hug Card; Hatch and partner created the cards in the mid-1990s and the Hatches now distribute them with copies of their book to inspire people to stay connected and spread love to one another. (Nanci Hutson/Courier)

“They are very approachable, and their tips are very practical and easy to put into practice,” said Kendall who met the Hatches when they did a presentation for families at the library. “They have lot of wisdom to offer families.”

So how is it the Hatches come to be nationally renowned authors, speakers and activists?

Hatch confesses the Columbine High School shooting that occurred back in 1999 – 13 people were killed and 20 wounded by two students who then killed themselves –“kind of freaked us out.”

Their children, too, opted to pursue their own brands of activism – with mixed reactions.

Their now 26-year-old son, McKay, in 2009 launched a “No Cussing Club” at his South Pasadena middle school. His efforts earned him both positive and negative notoriety – he and his club were featured on Jay Leno’s late night talk show

But he and his family incurred the wrath of those who resented what they apparently saw as a violation of their rights to free speech. Local newspapers chronicled the backlash.

Their daughter, Saige, now 22, inspired by her brother’s decision to stand out and make a difference, launched her own Modesty Club when she was in high school. Again, she earned both acclaim and derision as she was going against popular culture.

Nervous about the unexpected reactions, the Hatches still embraced their children’s courage to elevate the standards of those around them.

“We need to save each other,” Phelecia declared.