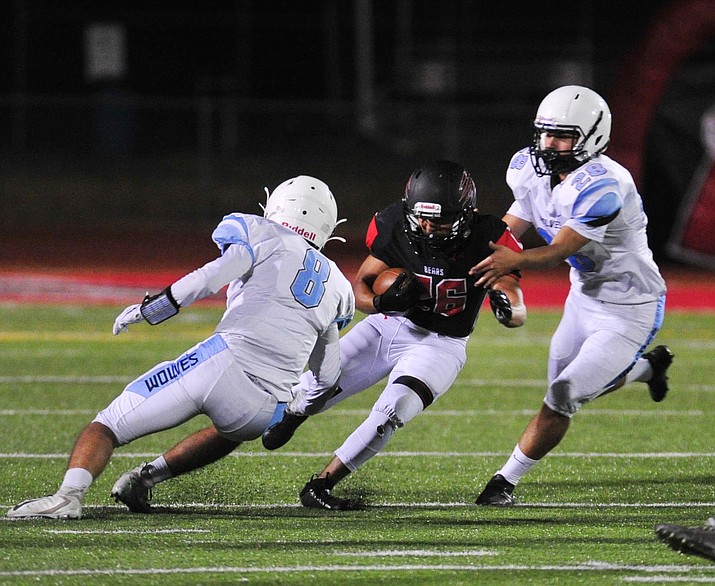 You might’ve thought that a hot start, both literally and figuratively, would’ve helped the Bradshaw Mountain football team in its pursuit of a third consecutive win on Friday the 13th in Phoenix.

The temperature was 106 degrees at kickoff and the Bears claimed a quick 10-0 lead on Greenway in the first quarter. Nevertheless, they would struggle mightily in the second half en route to a 36-12 setback in the Demons’ 2019 home opener.

Greenway (3-0 record) of the Skyline region outscored Bradshaw Mountain (2-2) of the Grand Canyon region 23-0 in the final half to end the Bears’ two-game winning streak.

“It mushroomed – we sputtered a little bit on offense,” Bears coach Chuck Moller said. “They were bigger than us and they had more subs than ours. We ran out of bullets.”

The Demons dominated their first two opponents of the campaign on the road, including their 33-13 pounding of Estrella Foothills Aug. 30 in Goodyear and their 51-12 drubbing of Sierra Linda Sept. 6 in Phoenix.

Last season, the Bears handed Greenway its lone regular-season loss. However, on Friday Bradshaw Mountain struggled offensively, particularly in a lopsided fourth quarter, and watched the game slip away.

With the Demons ahead 16-12 at the end of the third quarter, safety Caleb Wahner picked off Bradshaw Mountain 9 seconds into the fourth for a 35-yard interception return for TD and a 22-12 Greenway lead. The extra point failed.

“They shut down our run game pretty good and we were forced to throw in the fourth quarter and threw two picks,” Moller said. “Pressure-wise, I’d say we’ve had more pressure [from defenses] in other games. Pass protection was fairly good and we were just off our mark. They were the better team [Friday].”

Greenway later put the game out of reach when tailback Chris Johnson (22 carries, 107 yards, two TDs) scored on a 22-yard TD run, his second TD of the evening, for the 36-12 lead that stood.

Up only 13-12 at halftime, Greenway drove to the Bears’ 34-yard line on the third period’s opening possession, but Bradshaw Mountain’s defense stood its ground to turn the ball over on downs.

Greenway started opening up its offense in the passing game on its ensuing drive, driving deep into Bears territory. On first and goal from the 10, Murphy reached the 2. Two plays later, the Demons fumbled and were pushed back to the 12, but Brandon Woodland booted a 33-yard field goal to make it 16-12.

To open the second quarter, the Demons trailed 10-7. However, they reached the Bears’ 16 after benefitting from a short field on a Bradshaw punt and a 22-yard run. At the Bears’ 11 on third down, Bradshaw’s defense forced a fourth and 2, and with 10:39 left, Murphy scored on an 8-yard TD run. The point-after-try failed, giving the Demons a 13-10 lead.

Moises Hernandez (2 for 4, 23 yards) briefly replaced Grant at quarterback and drove the Bears into Greenway territory inside of 6 minutes to go before halftime. The drive stalled, although Grant punted the ball to the Greenway 1-yard line and the defense registered a safety to cut the Demons’ lead to 13-12.

Bradshaw Mountain led 7-0 on the game’s opening possession, as Grant threw a 24-yard touchdown pass to Alex Cabral (five catches, 104 yards, TD) with 10:10 left in the first quarter. It was Cabral’s fourth TD catch this season.

The Bears recovered a fumble on Greenway’s first drive, scooping it up at the Demons’ 17-yard line. But the Demons held Bradshaw Mountain inside the 5, forcing a 20-yard field goal from Grant for a 10-0 Bears lead with 7:33 remaining.

Greenway didn’t seem fazed, though, and with 3:52 left in the first quarter, Johnson scored on a 46-yard TD run to shave the deficit to 10-7 as the momentum began to shift.

Bradshaw Mountain returns home to Bob Pavlich Field in Prescott Valley for its Grand Canyon region opener against Lee Williams (2-1). The Volunteers’ game at Kingman Academy on Friday was cancelled.