Smoke in the Quad Cities? It's from up north
Whiskey Fire on Coconino National Forest tops 3,500 acres 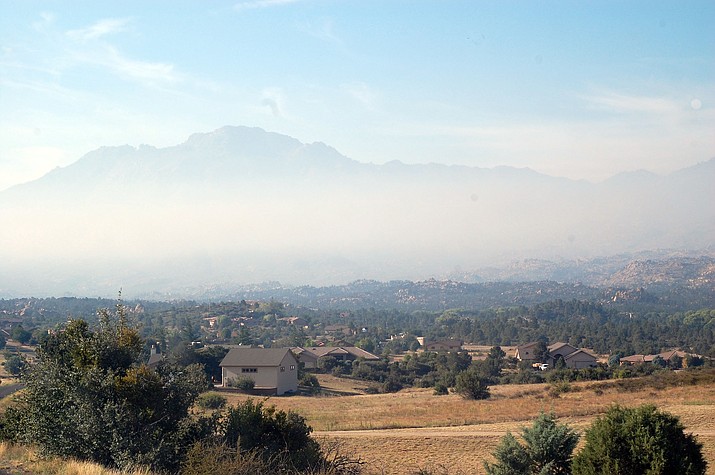 Granite Mountain, northwest of Prescott, is obscured from smoke off the Whiskey Fire on Friday, Sept. 13, 2019. The fire is burning on the Coconino National Forest near Flagstaff. (Tim Wiederaenders/Courier)

The smoke you awoke to Friday morning, Sept. 13, in the Quad Cities was from the 3,500-acre Whiskey Fire, which is burning on the Coconino National Forest.

Inquiries to the Prescott National Forest confirmed no local fires are burning enough to produce that amount of smoke.

Views from Pioneer Parkway on Prescott’s northwest side were completely obscured by smoke, and Granite Mountain was barely visible on Friday morning, for example. Skies in Prescott Valley were filled with smoke until mid-morning. 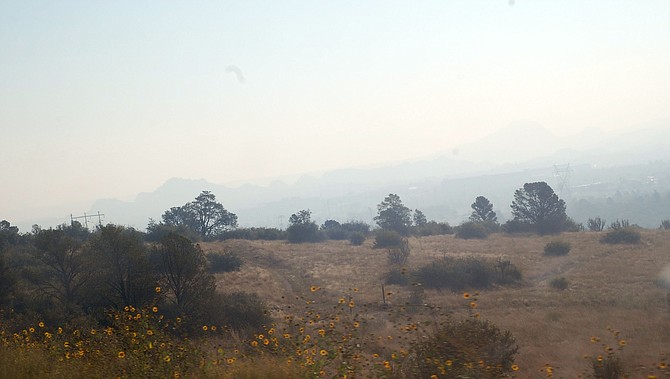 Prescott, from Pioneer Parkway, is barely visible Friday, Sept. 13, 2019, because of smoke from the Whiskey Fire in Flagstaff. (Tim Wiederaenders/Courier)

A news release from the Coconino National Forest stated smoke could be expected in the areas around Flagstaff and Williams, and down to the Village of Oak Creek.

The original news release, and the Friday afternoon update, did not mention Prescott and surrounding areas.

A meteorologist with the National Weather Service, as well as Yavapai County officials, said Friday the lower temperatures and winds contributed to the smoke settling, and likely it surprised everyone that the smoke went so far.

The Whiskey Fire is located about 8 miles west of Turkey Butte Lookout and southwest of Flagstaff. The fire, which is 16% contained, began from lightning on Sept. 2.

Authorities said Friday, if the smoke or temperature inversion happens again, people sensitive to smoke should stay indoors until the heat of the day shifts the air and lifts the smoke.

Taylor Fire is at 700 acres ... and growing
Smoke blowing in from east; no local fires reported
Forest Service: Drone crash sparks a wildfire near Flagstaff
Wiederaenders: Where there’s smoke, fire crews are being proactive
Crews step up efforts on Coconino National Forest wildfire