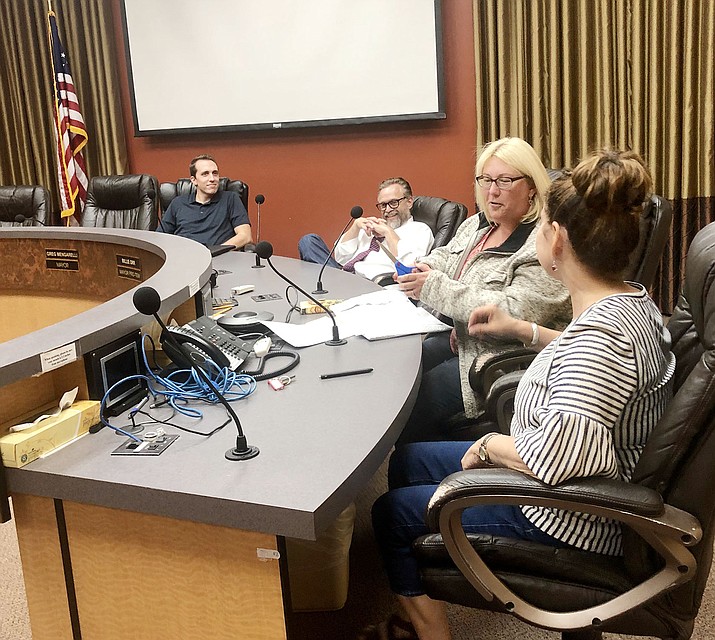 Tyler Goodman, assistant to the city manager, left, and Michael Lamar look on while Latona Jones of the Prescott Public Works Department and Francis Beegle of the City Clerk’s office open the only proposal received Friday, Sept. 13, 2019, for redevelopment of the Prescott City Hall property. (Cindy Barks/Courier)

The details have yet to be released, but a Scottsdale firm has officially expressed interest in redeveloping the Prescott City Hall property as a mixed-use project.

The Diversified Partners firm submitted the only proposal to Prescott’s earlier request for proposals (RFP) seeking ideas for reworking the 1.56-acre piece of City Hall property on South Cortez Street.

The city put out the request for proposals in July to ask for ideas from the private sector to “further stimulate economic development opportunities in (the city’s) historic downtown core.”

The RFP was among the ideas that came from discussions in early 2019 by an ad hoc city committee — the Mayor’s Commission on Facility Optimization and Property Usage (FOPU).

The commission was tasked with finding other alternatives for Prescott City Hall.

The premise was that the current City Hall is too small to meet city needs, and is largely inefficient and outdated.

In a March presentation to the City Council, the committee suggested that the city seek proposals to see if the city hall property could be better utilized.

Still to come would be discussion about where municipal operations should move to if the city were to receive a viable option for use of the land (although the committee did recommend that city operations should remain in the downtown area).

The city conducted a public bid opening at 2 p.m. Friday, Sept. 13, and officials announced at the outset that only one bid was received – from Diversified Partners.

Julie Harris, a retail leasing and sales associate with Diversified Partners and project manager for the Prescott proposal, attended the Friday bid opening.

She said afterward that Diversified Partners is proposing a “mixed-use development project” on the property.

While the RFP left it open for firms to suggest whether City Hall operations should remain, Harris said, “We’d like to incorporate City Hall in the project.”

The details of how that would happen, as well as whether the project would include a residential component, is “all up for discussion,” Harris said.

She said the project has been titled “Prescott Wanderlust,” adding, “We would like to celebrate the outdoor lifestyle.”

NOT AVAILABLE TO THE PUBLIC

Although city officials opened the proposal at the event, they declined to release it to the public, pending further review.

The Daily Courier filed a public records request to get the proposal late Friday, but City Attorney Matt Podracky responded that the city has consistently declined to release the details of sealed bids while negotiations are underway.

The law states that while the proposals must be opened publicly, with the name of each proposer recorded, “All other information contained in the proposals shall be confidential so as to avoid disclosure of contents prejudicial to competing offerors during the process of negotiation.”

Even though the city hall RFP produced just one proposal, Podracky said the statute would still apply.

Tyler Goodman, assistant to the city manager, said the city plans to put together a panel to review the proposal.

While the panel has yet to be formed, City Manager Michael Lamar said the city likely would reach out to members of the FOPU committee for possible membership.

Goodman expects the review to happen soon. “We’re hoping to get that accomplished over the next two weeks, and it will then be taken to council for consideration,” he said in an email later Friday. The council consideration likely would occur at an October meeting, he added.

Diversified Partners was the only firm to respond to the RFP of 14 that were represented at a July site visit that was mandatory for anyone planning to submit a proposal.