Fixing the curve: Sharp turn on Willow Creek Road could be in line for straightening 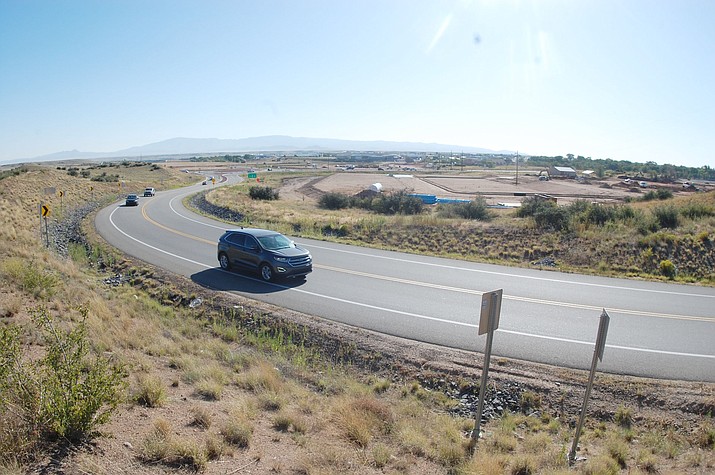 A car drives along Willow Creek Road on an abrupt curve located directly off the Deep Well Ranch Road roundabout on Highway 89. The curve has been a source of concern for local drivers ever since the 2016 opening of the realigned road. (Tim Wiederaenders/Courier)

An abrupt curve that has been a source of concern for local drivers ever since the 2016 opening of the realigned Willow Creek Road could be getting some aligning of its own soon.

Prescott Public Works Director Craig Dotseth told the Prescott City Council this week that design work is already underway for straightening of the curve that is located directly off the Deep Well Ranch Road roundabout on Highway 89.

The configuration of the curve came up during the council’s Tuesday, Sept. 10, consideration of a revised preliminary plat for the Antelope Crossings subdivision, which is being marketed as Saddlewood.

“Even before this discussion came up, we were already talking with the developer, discussing the curve and an ultimate solution for that,” Dotseth told the council, noting that talks have focused on how best to configure future roads in the area.

“We’re looking at correcting the curve with a more appropriate radius, as well as going to the four-lane configuration,” Dotseth said.

Back in August 2016, when the newly realigned Willow Creek Road was officially opened, then-Prescott Public Works Development Manager Steve Orosz said the curve near the highway was necessary, because it ultimately would be the site of a future free right turn onto the Deep Well Ranch Road extension to the west.

“Some people feel it’s a sharp curve, but it is properly signed for the right speed,” Orosz said at the time, noting that the speed limit on the curve is 25 miles per hour, while the remainder of the new road is 35/40 miles per hour.

Still, over the past several years, the curve has remained a source of driver issues. City records show that 17 crashes have happened at the intersection since June 2016 – eight of them in the first year of the newly aligned Willow Creek Road.

Dotseth acknowledged this week that the curve is “definitely abnormal compared to what we are all used to. The average commuter does not anticipate having a curve that sharp.”

He explained that circumstances have changed since the realignment for Willow Creek Road was planned.

“Originally when Willow Creek Road was in the concept stage of being designed about 10 years ago … The curve was going to be a slip lane to a roundabout,” Dotseth told the council. “That’s why it has the weird double curve to it. That’s what we’re looking at correcting.”

The roundabout is no longer planned, Dotseth said.

To adjust to the new plans, the city has entered a $79,760 contract with Lyon Engineering for design of the change, he said.

That work is expected to be complete by about March of 2020, after which, Dotseth said, the city would have an estimate of the cost for the roadwork, which will involve about 1,300 feet of roadway. Currently, he said, no cost estimate is available.

“We will substantially change the radius (of the curve),” Dotseth told the council.

Planning Manager George Worley told council that land alongside the curve was originally proposed for commercial uses, but is now being proposed for residential.

Although Worley said some questions have come up about removing commercial uses from the subdivision, he said the area does not lend itself well to businesses.

“The roundabout location causes very limited access,” Worley said, explaining that the configuration would allow for only a possible right-in and a right-out access into the commercial site — a situation that “renders it nearly useless as a commercial site; multiple points of access is far preferred.”

The change from commercial is within the developer’s rights, Worley said, because the city’s commercial zoning allows residential development by right.

“Having something zoned a commercial designation in no way requires it be developed for commercial uses,” Worley said. “That is up to the property owner to make that decision.”

Several council members voiced concerns about allowing the Saddlewood project to move forward before the curve is adjusted.

Developer Vic Chapman said, “I would agree — it was unsafe before we built the first home.”

Ultimately, the council approved the revised preliminary plat with the understanding that the final plat still needs to go to the council for approval before the project can get started.

“We agree to work together,” Chapman told the council.

After the meeting, Dotseth said roadwork on the curve could begin sometime in the current fiscal year, which ends June 30, 2020. He said money for the project likely would come from the Public Works Department’s miscellaneous streets fund. Antelope Crossings is a part of the 1,800-acre, 10,500-home Deep Well Ranch subdivision, but it was approved before the city’s 2017 approval of the entire Deep Well master plan.