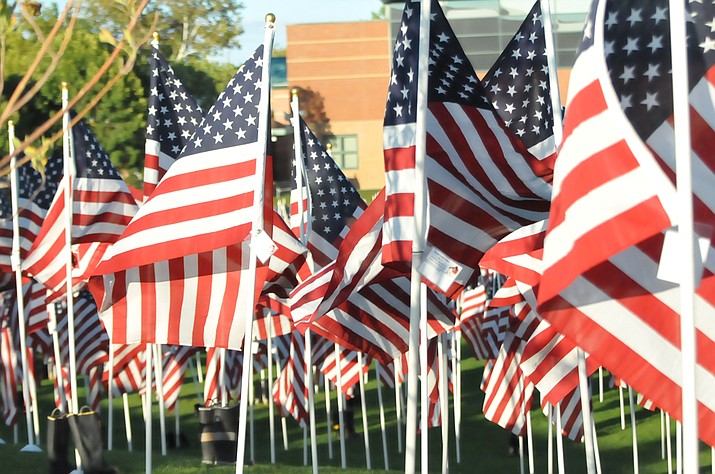 Eighteen years ago, these three New York Court Officers were among the first responders who died in the Sept. 11, 2001, terrorist attacks on the World Trade Center in New York City.

On Wednesday night, former New York State Unified Court System officer and 9/11 survivor Patricia Mack, who today lives in Prescott with her husband, Tim, gave a stirring tribute to these three men during the Town of Prescott Valley’s annual Healing Field ceremony at the Civic Center. 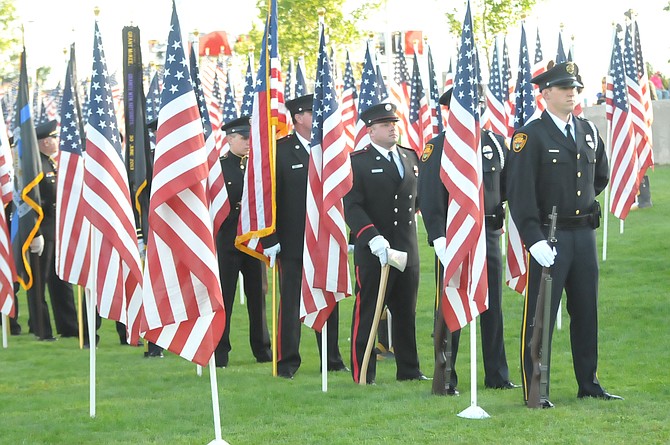 A group of Prescott police officers and Central Arizona Fire and Medical Authority officials line up between two rows of American flags before the hour-long event honoring 9-11 heroes. (Doug Cook/Courier)

Hundreds stood in the amphitheater grass to listen to Mack, who retired in 2010 after 36 years’ service to the State of New York. She would walk away from the twin towers that day.

“Today, 18 years after that horrific day, we gather to honor our fallen and remember the heroes that gave the ultimate sacrifice,” Mack said. “I was lucky and honored to have worked with them and know them as brave officers.”

After serving as a police dispatcher from 1976-1990, Mack became a New York State Court Officer assigned to Manhattan Criminal Court. Promoted to sergeant a short time later, in 2001, Mack was a sergeant instructor at the court police academy — stationed a mere four blocks away from the World Trade Center.

“We were preparing for in-service training to begin at 9 o’clock,” Mack recalled. “We heard and felt a loud boom. And when our building shook, we ran to the windows and had a clear view of a plane sticking out of the North Tower of the World Trade Center, surrounded by flames and black smoke.”

As Mack and the other officers gathered their gear to respond, they heard and watched a second plane slam into the South Tower at a much lower trajectory than the first plane.

“In that moment, we knew were under attack,” Mack said. “We grabbed boxes of face shields and clubs, imagining there would be many people who would need first aid and CPR. We had no idea the horrors we would encounter.” 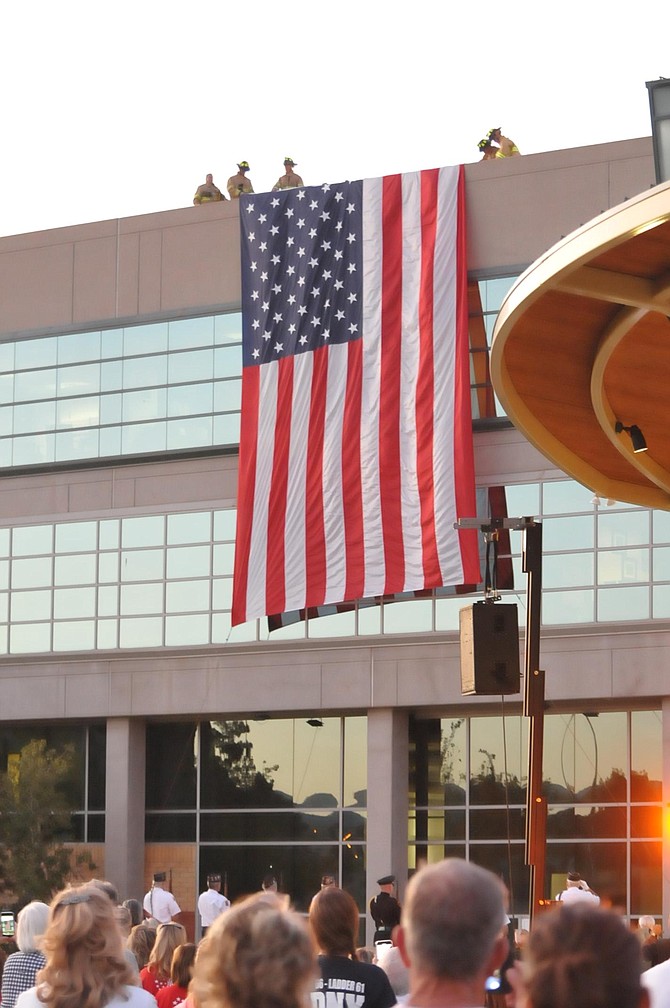 Mack called Thompson “Captain.” The 51-year-old, who stood 6-foot-4 “with a loud, booming voice,” had more than 25 years of experience in policing. Only recently had he been transferred to the academy.

“He was very excited to teach and share his experience with the recruits,” Mack recalled. “We were speaking that morning about a CPR class he had taught the day before.”

All of the officers had been certified by the Red Cross, which teaches officers to ensure an incident scene is safe before giving first aid.

“He didn’t think that was right to teach since, like many law-enforcement jobs, safety is a luxury we don’t always have,” Mack said. “Just a few short hours later, running beside him, I recalled that conversation.”

When Mack and the other officers arrived at the South Tower, Thompson ordered them “to join a gauntlet of first responders forming at the lobby” to assist with an evacuation.

“The last time I saw him, I looked across the street where he was confined with other agency supervisors, trying to formulate a plan,” Mack recalled.

“He was looking up at the smoke, the flames, the victims above, and then he purposely jogged across the street, disappearing into the lower level to rescue people trapped below.”

One of the officers afterward “spoke of seeing Capt. Thompson like a lighthouse in a stormy sea.” Thompson got as many people out of the South Tower as he could, but he died when the tower fell. He left behind his widowed mother, two sons and two grandchildren. He wouldn’t get the chance to meet a third grandchild, born after he died.

Wallace, 34, was engaged to be married. A trained EMT, he had been honored for saving a man’s life on a train on his way home from work.

On Sept. 11, 2001, Wallace took the subway to work and immediately began administering first aid to the injured people who had escaped the tower fires.

“He went from one to the next, dragging his medical bag along with him, tearing pieces of his own shirt to use as bandages when he ran out,” Mack said.

“He called his command to say he would be late getting to work.”

Jurgens, 26, was newly married and a former Army medic. He jumped into a jury bus along with 15 other officers assigned to New York’s Supreme Court to help with the rescue effort at the World Trade Center.

“He went into action immediately, going down into the lower level to carry people out who were too limp to walk,” Mack said. “He went back and forth continually, carrying a victim to a waiting ambulance and running back down again to get another.”

A tireless figure, Jurgens saved many lives. On his last trip to the lower level, the South Tower fell and he couldn’t escape. Mack had known Jurgens and Wallace because she was one of their instructors when they came through the academy.

“I think about them and the people they carried and bandaged – the ones whose lives they saved,” Mack said. “I hope they know how lucky they were that at one critical moment in their lives, they crossed paths with brave men like Capt. Thompson, Sgt. Jurgens and Sgt. Wallace.”

Purcell: Recalling 9/11: We’re not so divided after all
Photo: Mallory honored for founding of Healing Fields
80-story 3 World Trade Center to open after years of delays
Ground Zero visit was time for sadness, pride
Editorial: Kids' show host was an Arizona treasure