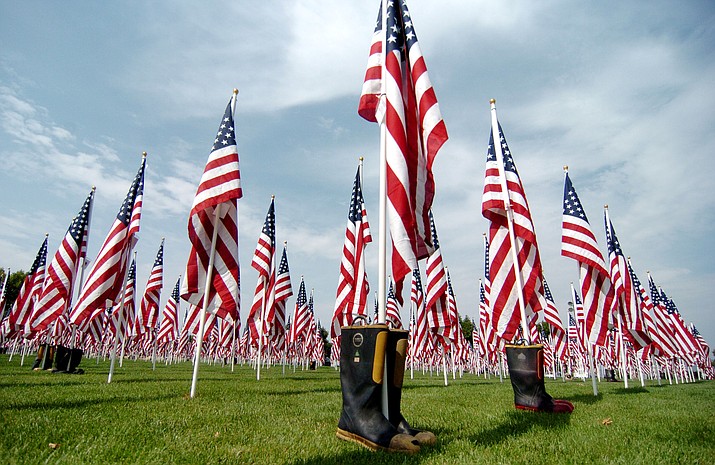 Every flag tells a story at the Annual Northern Arizona Healing Field display where thousands of U.S. flags are in a beautiful formation at the Prescott Valley Civic Center. This event will run from Friday, Sept. 6 through Friday, Sept. 13, 2019. (Les Stukenberg/Courier file)

The first Healing Field event took place in 2003 in Sandy, Utah. Paul Swenson, president of Colonial Flag Foundation, planned the field as a way to visualize the magnitude of human loss from the terrorist attacks that occurred on Sept. 11, 2001.

The tremendous response and interest from across the country soon resulted in displays in hundreds of communities – including Prescott Valley, Arizona.

The Prescott Valley Healing Field, on display this year since Sept. 6, has long been a project of former Prescott Valley Town Councilwoman and current Yavapai County Supervisor Mary Mallory. She first saw the Tempe Healing Field; its 4,000 flags left an impression that propelled Mallory to make a presentation to the Town of Prescott Valley about starting a similar effort here.

Healing Field and Field of Honor are trademarked names. Not only have the fields been used to honor victims of the 9/11 attacks, some communities use the title and idea to bring awareness to other issues such as child abuse and veterans assistance organizations. Locally, the field – which will be up through Friday, Sept. 13 – also honor, for example, the Fallen 19 (the Granite Mountain Hotshots who died in the Yarnell Hill Fire on June 30, 2013).

This year, the eighth annual Prescott Valley Healing Field will add photos of the victims. It is one thing to read a bio, it is entirely another to see the person’s face. It promises to be powerful.

The event is free and open to the public. It is open 24 hours a day.

Remember those who have gone before us. Remember the fallen.

Reminder, tonight, on Sept. 11, the Healing Field will serve as a backdrop for the annual ceremony commemorating Sept. 11.

This year’s ceremony will begin at 6 p.m. with an honor guard. The keynote speaker will be Patty Mack, retired captain of the New York Court Officers Academy. The ceremony will conclude with the lowering of the large flag on the roof of the Civic Center.