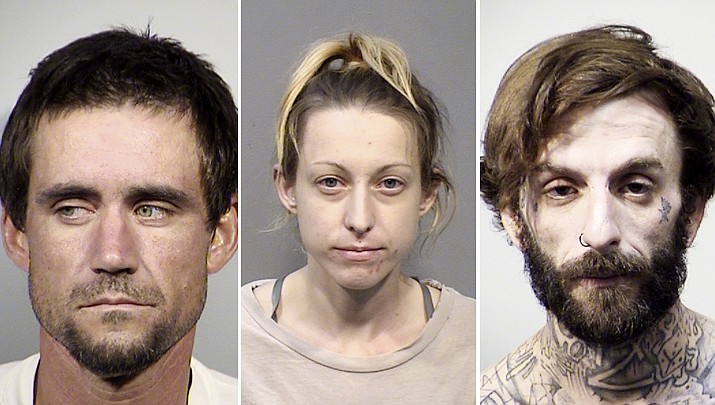 Jared Daricek, 34, from Phoenix (left), Brittney Jessup, 27, from Prescott and Zachary Olmsted, 33, from Glendale were all arrested in connection to an alleged kidnapping in Black Canyon City on Sept. 3. (Yavapai County Sheriff’s Office/Courtesy)

A Prescott woman and two men from the greater Phoenix area were arrested recently after allegedly kidnapping two men in Black Canyon City on Sept. 3.

The two victims were traveling to Phoenix with 27-year-old Brittney Jessup of Prescott that day and had stopped at the Rock Springs Café off Interstate 17 to use the restroom, according to a Yavapai County Sheriff’s Office (YCSO) news release. The two men had gone inside while Jessup waited outside.

Olmsted told them to get in the car or they wouldn’t get their belongings back and ‘something would happen to Brittney,’ YCSO reported. The victims were told that Jessup owed the suspects money.

As the cars drove away just before 1 p.m., the victim in the front passenger seat tried to call 911. Olmsted reacted by allegedly assaulting the victim to prevent the call, YCSO reported. The victim in the back seat then reportedly began kicking Olmsted. Both victims used this moment of confrontation to jump out of the moving vehicle on an I-17 onramp.

A passerby who saw the victims jump was able to capture a cellphone photo of both cars before they fled the scene, YCSO reported.

One of the victims sustained serious, but non-life-threatening injuries and was transported to a Phoenix-area hospital, where he was treated for multiple skin lacerations and head injuries. Arizona Department of Public Safety troopers were first to respond to the scene and then notified the YCSO.

Using the witness photo, detectives were able to get the license plate numbers and initially traced the black Chevy back to Jessup’s home on Diamond Court in Diamond Valley. She and the car were found the following day, YCSO reported.

“Brittney admitted involvement, but would not elaborate except to say the situation involved a ‘drug deal gone bad,’” YCSO spokesperson Dwight D’Evelyn said. “She refused to provide names of the other two suspects and would not cooperate further.”

Detectives noted in their report that it was apparent Jessup had full knowledge of the intent to kidnap the two victims and played a role in arranging the confrontation at the Rock Springs Café, D’Evelyn said.

A search warrant was served at Jessup’s home, where heroin and drug paraphernalia were seized, YCSO reported. She was arrested on Sept. 4 and charged with assault, kidnapping, endangerment and possession of heroin. She remains in custody at the Yavapai County jail in Camp Verde on a $7,500 bond.

Detectives then tracked the white Ford to a home in Phoenix. The registered owners explained the car was being used by their daughter who then admitted she had loaned the car to Daricek because he needed to pick-up a friend in Black Canyon City, YCSO reported.

Olmsted and Daricek were found separately on Sept. 6 and both admitted involvement, YCSO reported. The victims’ stolen property was found at Olmsted’s home. Olmsted was also found with 2.5 grams of methamphetamine on him when arrested.

Daricek was charged with assault, kidnapping and endangerment for his involvement in the incident and is being held in the Yavapai County jail on a $22,000 bond.

Olmsted was charged with assault, kidnapping, endangerment, theft and possession of a controlled substance and is being held in the Yavapai County jail on a $30,000 bond.

The investigation into the kidnapping is ongoing, D’Evelyn said.