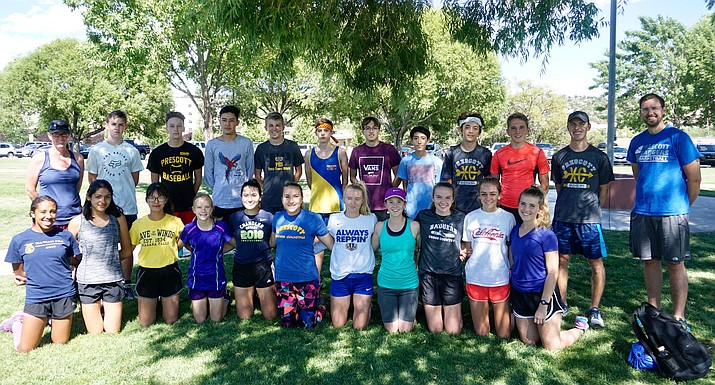 Prescott cross-country poses for a photo before a practice on Thursday, Aug. 15, 2019, at Prescott High School. (Aaron Valdez/Courier)

“For the girls’ side, there’s high expectations since we were second in state last year and we didn’t have a single senior girl on that team,” Bray said.

While the girls do have youth on their side – something that will aid for them for years to come¬ – they suffered a setback when runner Alyssa Moise tore her ACL while playing on the soccer team last year. The junior was a top-five runner for Prescott last year as she placed 74th with a 22:39.59 time in the state meet.

Moise will definitely be missed but plenty of returners will be poised to step up in her place including senior Makenna Bray, senior Emily McMahon, junior Tea Castro, sophomore Michelle Parent, senior Kaliyah Greer-Gipson and senior Erin Kennedy. Bray, McMahon and Castro all finished within the top 25 at last year’s state meet with Bray and MchMahon placing seventh and eighth, respectively.

“Both teams got second last year but I know the girls are definitely going after first for state,” Makenna Bray said. “We just probably got to stay healthy over the season and not overwork ourselves.”

As for the boys’ side, Chandler said that this season will be a “building year” for them since the team lost five seniors. However, Chandler has liked what he’s seen so far from his new arrivals and expects his returners to build upon their accomplishments from last season.

Boy returners include senior Alec Almendarez, sophomore Lisandro McCarter and junior Samuel Mackin. Almendarez and McCarter finished back-to-back within the top 10 at the state meet while Mackin placed 86th with an 18:44.92 time. The good thing is that Page also lost a number of key seniors last year, further increasing Prescott’s chances at a state title.

The Badgers will participate in an eight-meet schedule this season, which started with the Peaks Invitational in Flagstaff on Sept. 7. Lisandro McCarter was seventh overall with a 17:48 time, while Emily McMahon was seventh for the girls with a 21:23 time.

Excluding the highly-anticipated state meet, some of this season’s most desired meets amongst runners are the Prescott-hosted Ray Wherley Invitational (Sept. 14) and the Nike Desert Twilight XC Fest (Sept. 27) with the latter being a nighttime run through the desert under some fireworks.

“I don’t want to sound cocky but I think we can at least get second in state again,” McCarter said. “But it’s going to take a lot of hard work and stretching good.”