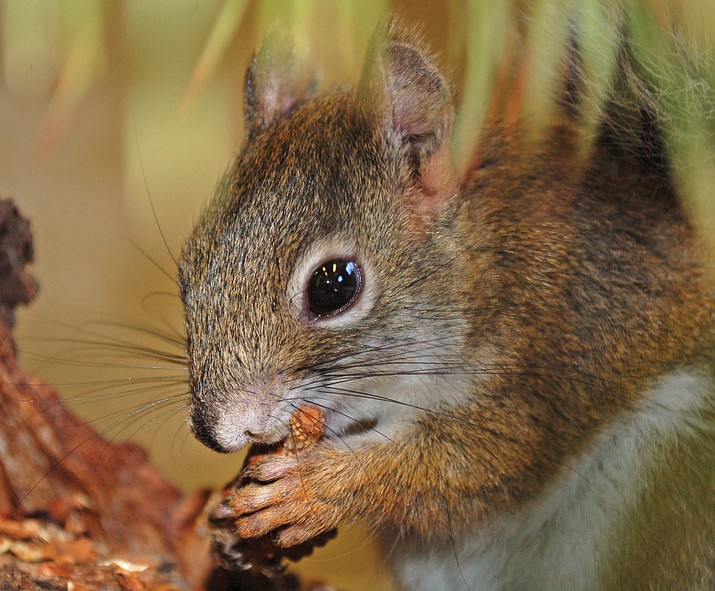 The Mount Graham red squirrel is an isolated subspecies of the North American red squirrel distinguished by its smaller body and narrower head. Fewer than 70 are known to survive. (Phoenix Zoo/Courtesy, via Cronkite News)

An Arizona squirrel near extinction is getting some help from the U.S. Fish and Wildlife Service, which will consider adjusting the critical habitat area of the Mount Graham red squirrel to protect the remaining population of about 70 animals.

Fish and Wildlife has announced a status review to revise the critical habitat designation for the Mount Graham red squirrel, found only in the Pinaleño Mountains near Safford.

The Mount Graham red squirrel is a subspecies that lives only in the upper-elevation spruce-fir forests of the Pinaleños and feeds primarily on seeds from the trees, according to the Arizona Game & Fish Department. The squirrels are highly territorial and have lower reproduction rates than red squirrels in other locations, and they’ve been listed as endangered since 1987.

The decision was in response to a petition filed December 2017 by the Center for Biological Diversity in Tucson. The organization filed a lawsuit in April 2019 to compel Fish and Wildlife to issue a decision on its petition.

Although the announcement means Fish and Wildlife is only beginning the process, the goal is to redraw the habitat to include where the squirrels are currently residing because much of the spruce-fir canopy in the original critical habitat has been destroyed by fire and the presence of three observatories on Mount Graham.

“They (the squirrels) are in a world of hurt where there is very little of their canopy forest left for them to survive,” said Robin Silver, co-founder of the Center for Biological Diversity. “The reason they have been able to survive there for the last 10,000 years or so is because there has been a thermal envelope because of the canopy forest.”

In an October 2018 press release, the Arizona Game & Fish Department reported a minimum estimate of 67 squirrels — a 91% increase over 2017 estimates of 35 squirrels. That was after the Frye Fire, which drastically reduced the population from an estimated 252 in 2016.

The Fish and Wildlife Service set the squirrel’s critical habitat in January 1990; it has not been adjusted since.

The findings “presents substantial scientific or commercial information indicating that the petitioned action may be warranted,” according to a release published in the Federal Register, meaning that the evidence provides a strong enough case for Fish and Wildlife to begin the process of adjusting the Mount Graham red squirrel critical habitat to better preserve their population.

Much of the red squirrel’s habitat was destroyed by wildfires and backburns related to observatories in the area, according to the petition filed by the Center for Biological Diversity, which included satellite images to show the reduced size of the spruce-fir forest area that the squirrels inhabit.

The squirrels historically roamed an estimated 700 acres of the spruce-fir canopy on Mount Graham, which rises more than 10,000 feet above sea level. In 1988, 615 suitable acres of canopy remained, but since then, much of it has been destroyed by wildfires and backburns meant to protect the observatories, cabins and a bible camp in the area, according to the Center for Biological Diversity. Firefighting techniques have given the telescopes higher priority over the squirrel habitat.

Fish and Wildlife will be taking research given to them by the public, along with any public comments, and will review the information before deciding how to proceed. Public comments can be made on the service’s website. A timeline for a decision has not been set.