Street or sidewalk? Where that can belongs on trash day 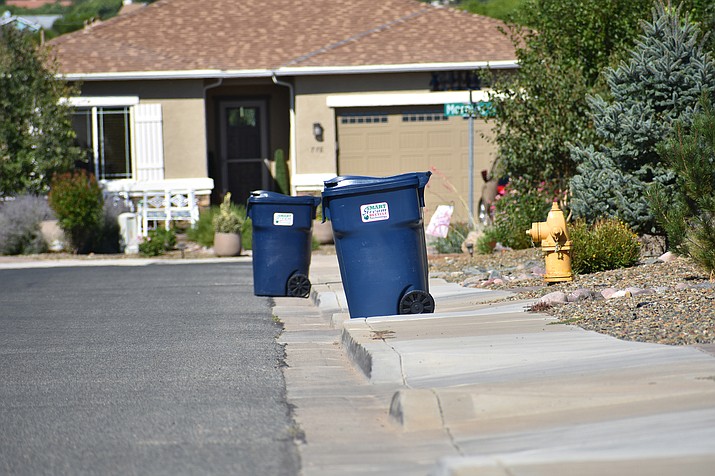 Some quad-city residents vehemently declare that all trash containers should be on the sidewalk on trash pickup day. These “on-the-sidewalk” believers claim this is because trash cans in the street make it difficult to navigate already narrow roadways and cause parking challenges. The other side claims just as vehemently that it’s illegal to block the sidewalks with trash cans, and this forces residents — including children, disabled persons and people walking pets — to walk in the street. The “on-the-street” believers will also cite HOA rules about not blocking the sidewalks. (Courier photo)

On trash day, do you put your container on the sidewalk or in the street?

It’s something that happens every week – the trash gets put out to get picked up, the collectors come in their easily recognizable trucks and take it away.

The question is though … do you put your trash container on the sidewalk or in the street?

Greg Traeger also said he puts his out in the street.

“It’s easier for the trash guys to get to, Treager said.

It is definitely a major debate, said Bret Gurtner, dispatcher at Patriot Disposal. After all, Gurtner said, the sidewalk is where people walk and the streets are already pretty narrow, and adding a container makes it difficult for the cars.

In his opinion, putting the container in the street would be the better option because otherwise, the people would have to go around it, he said. At the same time, Gurtner said he also considers the truck itself, along with the mechanical arm it uses for grabbing the bins, when it comes to container placement.

“It’s built for the can to be on the ground,” he said. “If it’s on the sidewalk, it can grab the wheels.”

However, the collectors can still work with the container if it’s on the sidewalk. The arm would have to be readjusted, Gurtner said.

Additionally, the City of Prescott doesn’t just recommend the street. Placing containers out for collection on the street is outlined in Chapter Seven of the Prescott City Code.

WHEELS ADJACENT TO CURB OR AT STREET EDGE

“Residential solid waste and recycling 68-gallon containers set out for collection must be placed in the street in front of the house to which they are assigned, with the wheels adjacent to the curb of the sidewalk, and the lid opening toward the street unless otherwise determined by the Director or designee,” the code reads in Chapter 7-4-15. “When there is no sidewalk the container(s) must be placed at the edge of the street or collection point determined by the Director or designee, within two feet of the pavement or improved road as applicable.”

Don’t forget to make sure the lid is closed as well.