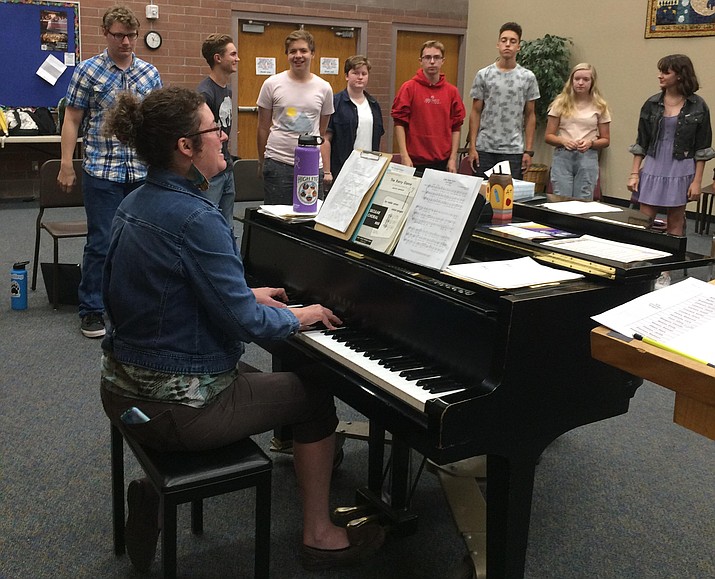 Choral director Erin Sobo playing the piano as the mixed ensemble choir does vocal exercises and then performs one of their Yavapai Chorale Invitational tunes, “Loch Lomond.” (Nanci Hutson/Courier)

A number of the 2019-2020 choral members, school administrators and parents are giving a hearty thanks to director Erin Sobo who has enabled them to perform at a level such that they have been invited to sing on stage at Carnegie Hall during their spring break.

The Prescott Unified School District Governing Board unanimously approved Sobo’s request to take 28 students, and seven chaperones, including her as director, to New York City between March 6 and March 9 where the women’s ensemble and mixed men and women’s chorus will perform with other high school students from across the country.

The chorus did not audition for this opportunity, but rather Sobo was extended an invitation from a former Chino Valley High choral colleague, Dee Wilkins, who works with Manhattan Concert Productions. 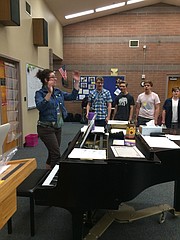 “I think it’s going to be really cool,” said senior Isaiah Carman of the cross-country trip to New York City. The cost is expected to be about $2,000 per student.

Isaiah is particularly delighted to see how far the choir has come since his freshman year. He noted his first year the choir didn’t qualify for the state choral finals. Now both the mixed choir and the women’s ensemble are accomplished enough to perform at what is viewed as a premier national musical venue.

“I was pretty excited, and kind of shocked we were picked,” Isaiah said.

Senior Hope Olsen said she had a similar reaction.

“Us! What?” Olsen said was her initial response when Sobo announced this opportunity. 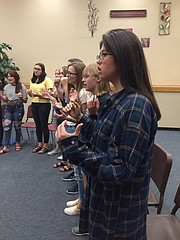 Senior Jackie Preston and fellow female choir members in the mixed ensemble practice in class with director Erin Sobo. Members of this choir, as well as the women’s ensemble, will be performing at Carnegie Hall during an approved field trip from March 6 to March 9. (Nanci Hutson/Courier)

Sobo said she is reveling in the students’ excitement.

Beyond earning permission for the trip from the powers that be, Sobo now is focused on practicing with her students the music they will perform at the Yavapai Chorale Invitational to be hosted in the Yavapai College Performing Arts Center on Sept. 16. The choir will then prepare for the state choral quarter finals at the end of October.

Come December and January, Sobo said the choirs will begin to focus on the six to eight different songs they will perform with national collegiate conductors at Carnegie Hall.

“We’ll work it up and take it on the road to New York,” Sobo said with quite-evident delight.

Hope and Isaiah, and fellow choir members, are grateful for what will most likely be a once-in-a-lifetime experience. Just the chance to tour New York – the students will attend a Broadway musical – will be memorable, hope noted. 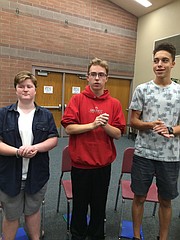 The two then quickly offered credit for this chance where they say it is deserved – with Sobo.

“She knows what she’s doing. She’s built this program,” Hope said. “We have her to thank.”