Murray's debut memorable for Cards, without win (or loss)
NFL 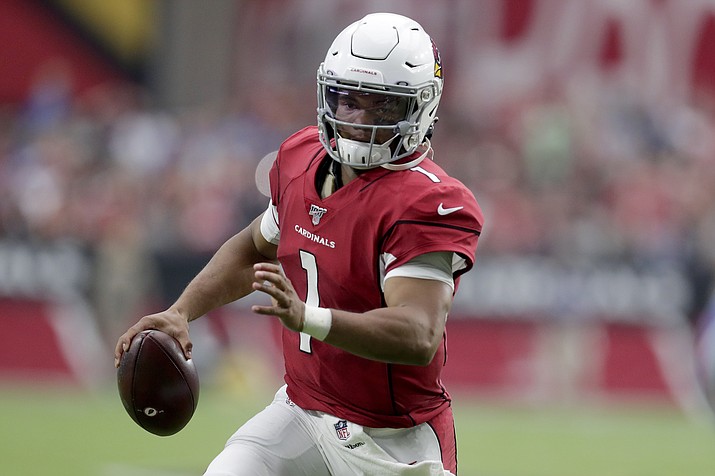 Arizona Cardinals quarterback Kyler Murray (1) scrambles against the Detroit Lions during the first half of an NFL football game, Sunday, Sept. 8, 2019, in Glendale. (Darryl Webb/AP)

Once the fourth quarter hit, Murray was masterful.

So what if the day ended in a tie? Murray had a debut to remember.

Looking every bit like the No. 1 overall pick after a shaky start, Murray rallied the Cardinals from an 18-point fourth-quarter deficit to eke out a 27-all tie against the Detroit Lions on Sunday.

"It was pretty ugly at first, but you try to stay the course," Murray said. "It's a long game. Proud of the way we fought, but unfortunately we couldn't get the win. A tie's better than a loss, I guess."

The Cardinals were one of the most talked-about teams heading into the NFL season. They had Murray, the Heisman Trophy winner and No. 1 overall pick, and Kliff Kingsbury, the former Texas Tech coach attempting to bring the Air Raid offense to the NFL full-time.

Their debut made Sunday's game one of the most anticipated in franchise history.

For three quarters, it looked like a desert disaster.

The Air Raid, known for producing prodigious numbers in the college game, was more Air Dud, appearing unfit for the NFL as Arizona's choked and sputtered.

Murray, dynamic with his arm and legs at Oklahoma, seemed not fast enough, tall enough or accurate enough to succeed against bigger, faster NFL players.

Unable to protect Murray or get its run game going, Arizona had 58 yards of offense in the first half. Murray was 6 for 15 for 41 yards with one throw-it-up-for-grabs interception and two balls batted back in his face.

The third quarter wasn't much better; Murray was 3 for 9, the Cardinals had 42 yards and trailed 24-6.

After keeping the offense vanilla in the preseason to hopefully gain an advantage, it appeared the Air Raid needed a bit more seasoning.

"It was three quarters of the worst offense I've seen in my life," Kingsbury said. "And it was my fault."

Given all summer to conjure up ways to Air Raid the NFL, the first-year coach went overboard, making things too complicated, too quirky.

Once Kingsbury simplified his play-calling and personnel packages, Murray and the rest of the Cardinals attacked the Lions instead of waiting to get ambushed.

"We just started doing what we were good at," Murray said. "I don't want to say simple, but just running our stuff and going fast. I think that opened things up."

Finally able to get into a rhythm, Murray became the piston firing the Cardinals forward. He completed 15 of 19 passes for 154 yards and threw two touchdown passes in the fourth quarter.

Murray hit David Johnson on a 27-yard pass for his first NFL TD pass, found Larry Fitzgerald on a 4-yard score with 43 seconds left and connected with Christian Kirk on a 2-point conversion to send the game to overtime.

"He's a tremendous competitor and to go through that as a rookie in your first start, to find a way to bring his team back says a lot about him," Kingsbury said.

The teams traded field goals in overtime, leaving both with an unsatisfying tie.

Given how bad Murray and the Cardinals were for three quarters, they'll take it.