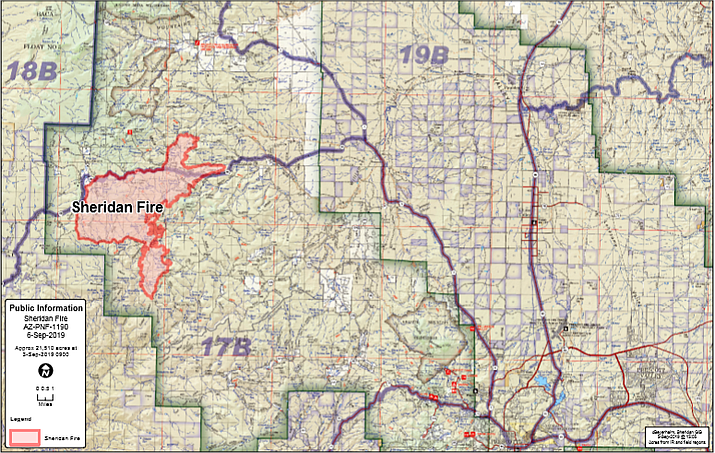 A map showing the perimeter of the Sheridan Fire as of Sept. 9, 2019. (Prescott National Forest/Courtesy)

Noting favorable conditions, fire managers plan to once again begin firing operations to ignite some of the still unburned vegetation in the interior of the designated Sheridan Fire burn area, according to a Prescott National Forest news release Monday morning, Sept. 9.

Ignitions are expected to begin Monday afternoon and perhaps continue over the next few days, according to the release.

“These operations serve to improve the health and ecological function of the area and reduce the risk of high intensity fire for many years into the future,” PNF spokesperson Cheyenne Warner said in the release.

Unlike some of the previous firing operations on the Sheridan Fire, not much smoke is expected during this round, Warner said. The smoke that is produced will likely travel to the north and east, affecting the communities along northern Williamson Valley Road and into Paulden.

The Sheridan Fire closure area was reduced on Friday, Sept. 6, but restrictions remain:

County Road 68 (Camp Wood Road) is now open. All areas north of Camp Wood Road are open with the exception of a small area adjacent to Forest Service Roads 95 and 9821B. The area south of Camp Wood Road remains closed. The current closure area map and detailed description are available on Inciweb (https://inciweb.nwcg.gov/incident/6522) and on the PNF website (www.fs.usda.gov/prescott).

Location: 23 miles northwest of Prescott on the Chino Valley District

Resources: Approximately 60 personnel including three engines, one crew and one helicopter