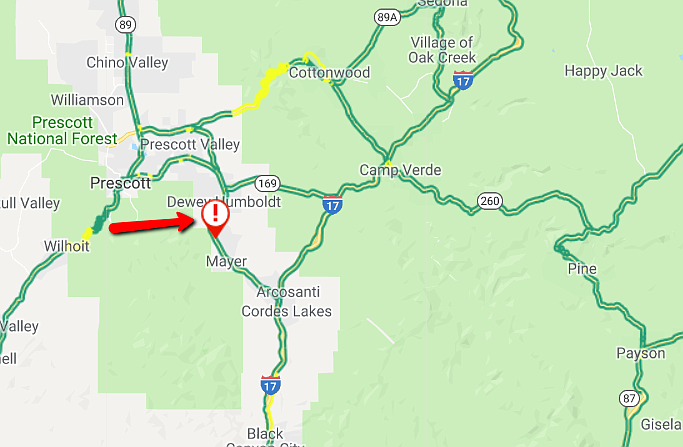 Theresa Case, 48, of Cordes Lakes died Sunday, Sept. 8, after her car crashed on Highway 69 near Mayer.

Case was driving southbound by herself in her Ford Sedan when the car rolled over the guardrail and down an embankment off the west side of the roadway at about 5:36 p.m., said Bart Graves with the Arizona Department of Public Safety.

Not wearing a seatbelt, Case was ejected from her car and pronounced dead at the scene, Graves said.

Police believe a blown tire may have contributed to the crash, but the investigation is ongoing, Graves said.

Southbound Highway 69 was completely closed for about two hours at milepost 274, according to the Arizona Department of Transportation. The right southbound lane was reopened at about 7:25 p.m., and all lanes were reopened shortly after 9 p.m.

Highway 69 lanes reopening after crash
Rollover on Highway 89A kills one, injures six others north of Prescott Valley
DPS: 2 dead, 3 injured in crash on Interstate 17 near Cordes Junction
Both I-17 southbound lanes open south of Cordes Junction
Update: Southbound I-17 reopens
Event Calendar