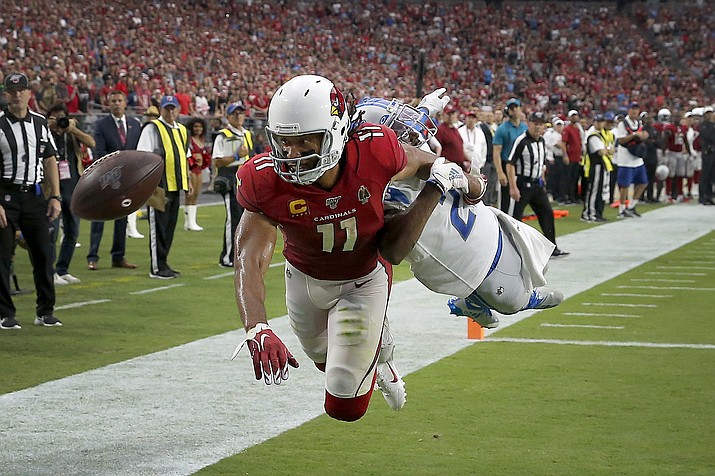 TEMPE — It took one game to prove that Kyler Murray could be clutch at the NFL level.

Arizona coach Kliff Kingsbury was confident that was the case all along. It was one of the major reasons the Cardinals were so comfortable taking the quarterback with the No. 1 overall pick.

"We did some analytics on his fourth-quarter statistics last year at Oklahoma and it is insane, his numbers," Kingsbury said. "The completion percentage, the touchdown-to-interception ratio, the yards per carry. That was something prior to the draft process we were really fascinated by."

The Cardinals came out of Sunday's 27-27 stalemate with the Lions feeling about as good as possible considering the outcome was a tie. Arizona trailed 24-6 early in the fourth quarter before rallying for 18 straight points and forcing overtime.

Murray was outstanding in the fourth quarter, completing 15 of 19 passes for 154 yards and two touchdowns. Overall, he was 29 of 54 or 308 yards, two touchdowns and an interception.

"We could have played better in a lot of phases," Kingsbury said. "But to see our resolve and guys having good energy on the sideline, even when things weren't going well. I think as a team, you came out thinking that we'll fight together. That's important early in the season."

The Cardinals' offense clearly has some potential, even after the slow start.

Murray showed the ability to make quick decisions in crucial moments and appeared to thrive under pressure. David Johnson was active in the running and passing game. Larry Fitzgerald, now in his 16th NFL season, continues to produce with eight catches for 113 yards and a touchdown.

Maybe most surprising: An unheralded offensive line held its own against a solid Detroit defensive front.

"Once you kind of get in that rhythm, we're going quick, everything kind of just opened up," Murray said. "We just got into a rhythm and we started playing better."

The defense had some good moments and played well during the fourth-quarter comeback. But inconsistent play, particularly in the secondary, helped the Lions build their 24-6 lead.

Lions receiver Danny Amendola was wide open on his 47-yard touchdown catch and tight end T.J. Hockenson had six catches for 131 yards and a touchdown. Hockenson, a rookie playing in his first game, showed why he was the No. 8 overall draft pick, but the Cardinals had a huge problem matching up with his combination of strength and speed.

He ran for 82 yards and caught six passes for 55 yards, including a 27-yard touchdown catch that really got the Cardinals' rally going in the fourth quarter.

Receiver Andy Isabella was the Cardinals' second-round pick in April and expected to be a really good fit for this offense, but he was a nonfactor in the first game. He didn't catch a pass and it won't get any easier when Michael Crabtree likely joins the rotation next week. He did have a role on special teams against the Lions, returning four kicks for 86 yards.

Arizona came out of the game fairly healthy. Now the team needs some of its offensive linemen to get back so they have some depth.

Starting right tackle Marcus Gilbert and backup guard Lamont Gaillard missed the Lions game with knee injuries. Kingsbury said Gilbert would also miss Sunday's game against Baltimore and the team was trying to determine how long he'll be out.

Kingsbury mentioned that the Cardinals were having workouts for free-agent offensive tackles on Monday. The team also re-signed Jeremy Vujnovich, two days after he was released on Saturday, to provide depth at guard.

82 — the number of offensive plays run by Arizona, which gained 387 total yards, threw for 308 yards and had nine third-down conversions. All of those numbers were better than any game last season.

It's not often a tie tastes like a win, but Arizona's comeback on Sunday certainly had that feel.

It seems that Murray has a knack for producing in clutch moments and Kingsbury's offense can work. Now the Cardinals actually have to do it for a full four quarters so those 18-point comebacks aren't needed.

"We've just got to execute better," Murray said. "I think at the end of the day it's not just one person's fault. We are out there on the field and we have to execute what he calls. It's a learning experience, go out next week and we've got to do better."