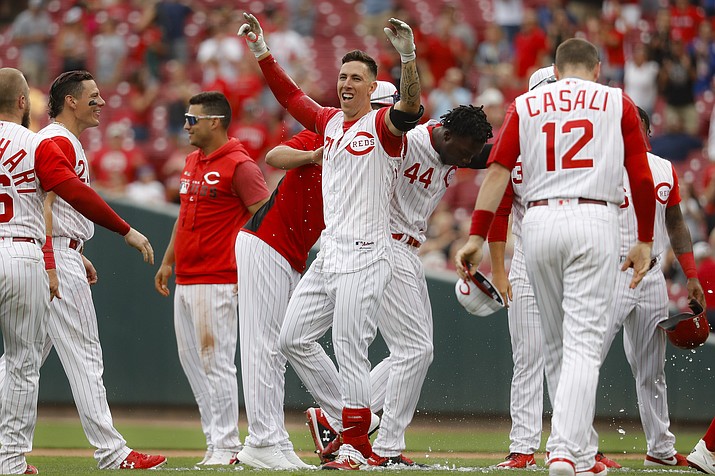 CINCINNATI — A few days after his Ruthian two-way feat, relief pitcher Michael Lorenzen was again the right man in the batter's box for the Cincinnati Reds.

Lorenzen lined a game-ending, pinch-hit double in the ninth inning to help the Reds snap the Arizona Diamondbacks' five-game winning streak with a 4-3 victory Sunday.

Lorenzen is the first Cincinnati pitcher with a walk-off hit since Randy Keisler in the 14th inning against Washington on May 24, 2005. It was Lorenzen's fifth career pinch hit and happened four days after the reliever became the first player since Babe Ruth in 1921 to homer, play the outfield and earn a victory on the mound in the same game.

"First I wanted to hit the ball not on the ground," Lorenzen said. "I knew he was trying to get the double play. I tried to look underneath the ball."

Pinch-hitter José Peraza and Phillip Ervin greeted reliever Yoan López (2-6) with one-out singles. Lorenzen then delivered against left-hander T.J. McFarland, capping a nine-pitch at-bat with his RBI double down the left field line before getting mobbed at second base.

"I ended up putting myself in a hole," McFarland said. "I had to throw strikes. Obviously, I'd rather face him than (Joey) Votto. I threw a fastball that stayed up. It was in, but he hit it."

The Diamondbacks lost for the second time in the 13 games and remained 1 1/2 games behind the Cubs for the second NL wild card going into a four-game series against the Mets in New York. Chicago lost 8-5 at Milwaukee on Sunday.

"Obviously, you don't want to lose the game, especially on a walkout hit at the end, but we've got a big series in New York," McFarland said. "We'll forget this tomorrow and come back and beat them."

Eugenio Suarez homered twice and has 44 this season for Cincinnati, one behind Mike Trout and Pete Alonso for the major league lead. Ketel Marte extended his hitting streak to seven games with a two-run homer, his 32nd of the season.

Suarez hit a tying homer in the eighth off Jimmie Sherfy's slider, the same pitch Sherfy used to get three swings-and-misses from the slugger Saturday.

"He was tough yesterday," Suarez said. "He struck me out on three breaking balls in the dirt. When I saw him come into the game, I just was ready. I am always ready for a fastball, but I stayed with that breaking ball."

Raisel Iglesias (3-11) pitched the ninth to get the win.

Mike Leake allowed seven hits and two runs in 6 1/3 innings, but he remained 0-5 in nine career starts against his former team. Leake, Cincinnati's top choice and the eighth overall pick in the 2009 draft, struck out three, hit one batter and didn't walk anybody.

"I had to be efficient," Leake said. "I knew they would attack me and be on me, and I had to pitch to the best of my ability."

The Diamondbacks took a 1-0 lead in the second after Eduardo Escobar was originally ruled to have been forced out at second base on Jake Lamb's grounder. A video review overturned the call, and Nick Ahmed made the reversal pay off with an RBI single.

Tim Locastro set an Arizona franchise record by being hit by a pitch for the 20th time this season. He was tied with Justin Upton, who was hit 19 times in 2011.

Reds: OF Brian O'Grady was hit on the left foot by Leake with one out in the seventh inning. O'Grady walked off the pain as the Diamondbacks made a pitching change and stayed in the game.

Reds: After getting Monday off, Cincinnati opens a series in Seattle on Tuesday night. RHP Trevor Bauer (10-12) is 1-4 with an 8.23 ERA in seven starts for the Reds since being acquired from Cleveland on July 31. He'll face Mariners rookie LHP Justus Sheffield (0-1, 5.51).