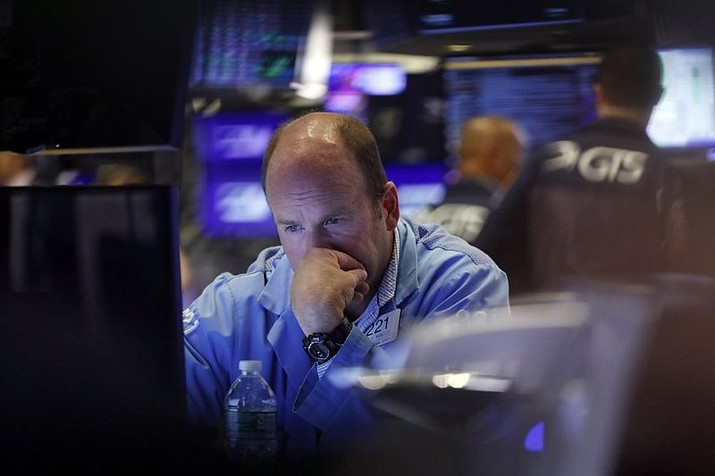 In this Aug. 23, 2019, file photo trader Peter Mancuso works on the floor of the New York Stock Exchange. Stocks tumbled in August, handing the S&P 500 its second monthly loss this year. Investors are unlikely to be able to recoup those losses in September. (Richard Drew/AP, File)

If you thought August was a rough month for stocks, you might want to brace yourself for this month.

Stocks tumbled in August, handing the S&P 500 its second monthly loss this year. And odds are that investors won’t recoup those losses in September.

“History says be prepared for a down month because it’s the only month since World War II to post a decline more frequently than an advance,” says Sam Stovall, chief investment strategist at CFRA.

Still, the factors that rattled markets in August are expected to continue weighing on stocks this month: uncertainty over the escalating trade conflict between the U.S. and China, and fear that the dispute will exacerbate a global economic slowdown and tip the U.S. into recession.

“August and September are two of those months that can really trip up bull markets,” said Ryan Detrick, senior market strategist for LPL Financial. “We’re not quite out of the woods yet.”

The S&P 500 ended August down 1.8%. The benchmark index had hit an all-time high as recently as late July.

Trading became volatile last month, with the S&P 500 notching daily moves of at least 1% about half the time, after going nearly two months without such a move.

Only three sectors in the S&P 500 finished August with gains: utilities, real estate and consumer staples, all defensive sectors.

Investors are worried about recession. The bond market seemingly confirmed these fears when long-term bond yields fell below short-term ones, a so-called inversion in the U.S. yield curve that has frequently predicted past recessions.

This month offers no shortage of reasons for further turbulence, including the ongoing trade war and a meeting of the Federal Reserve board.

“You have very big events on the horizon that could absolutely cause a good bit of volatility,” said Detrick.

While history shows September is usually a down month for stocks, past trends also suggest the market could end up bouncing back by the end of the year.

Consider that the past 15 times that the S&P 500 has finished lower in August, it has ended higher by December.

Another positive trend to hang your hopes on: When the S&P 500 begins September above its 200-day moving average, as it has this month, it’s ended the month higher eight of the past 10 times, Detrick noted.

The S&P 500′s strong start to the year could also bode well for how its finishes 2019, despite the turbulent summer.

Favorable historic trends are no guarantee, of course. The trade war and signs of a slowing economy remain caution flags for investors, even as resilient consumer spending keeps the U.S. economy growing, albeit more slowly than earlier this year.

“We need to get some positive news that’s constructive action regarding trade,” Stovall said. “If the two biggest economies continue to have a trade disagreement, that’s only going to spell depressing news, if not worse, for the global economy.”

People familiar with the negotiations but not authorized to speak about them have told The Associated Press the structured bankruptcy plan would allow the company to keep selling opioids as a public benefit trust, with the profits as part of the settlement money. The rights to overdose antidotes it has in development also would be included.

If the company does not have a settlement in place before the Oct. 21 trial date, it could file a “freefall” bankruptcy, an option that likely would mean less money for the plaintiffs. Lawsuits against the Sacklers might be able to continue but would face the challenge that much of the family’s money is believed to be outside the U.S.

The first step to reaching a nationwide settlement is getting buy-in from most state attorneys general.