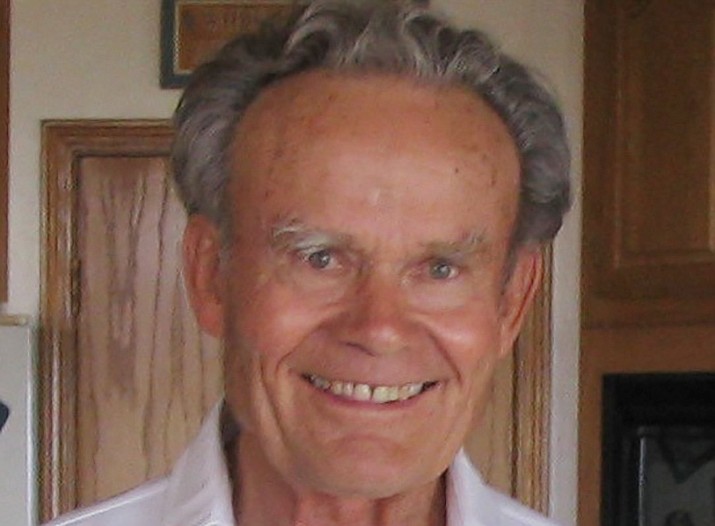 Always an optimist, Lloyd’s willingness to search hard for the upside, coupled with his deep and sincere belief that most people are good and decent, conspired to push friends, family, and colleagues to share that view.

Lloyd was born in 1928 in Artesia, California, the second child of Carl and Ethel Benson. At the age of two, during the Great Depression, his family left sunny California to run a hog farm in the even sunnier Peoria, Arizona. Young Lloyd worked hard helping his father sell freshly butchered pork door to door, but his memories of that time were more densely packed with stories of running barefoot across freshly cut fields, of eating hot meals with friends in houses having neatly swept dirt floors, and of tasting cool vanilla ice cream cones purchased by his grandfather for him, his sister, Elaine, and a cluster of cousins who had joined the family on the farm.

Lloyd returned to California when he was 12, an unusually self-confident and capable boy. Two years before he had driven his mother, pregnant with his brother Don, across the desert to be with relatives. And in Bellflower, a stone’s throw from where he started, he worked in the latest family business, a dairy, delivering milk with his cousin, Darrel, and covering up for his wayward Uncle Harry as part of a mutually beneficial relationship. He attended Excelsior High School where he ran track, played football, and studied occasionally and where he met his lifelong friend, Alan Bingham. After graduation, Alan and Lloyd signed up for the Marines as part of a clever ploy to see the world. They were sent to Camp Pendleton, 75 miles from home, where they remained for their entire two years of service and gained a lifelong dislike of khaki green. The young men used the GI bill to attend California Polytechnic State University in San Luis Obispo, and it was there that Lloyd discovered his love of math and engineering. He also gained a facility for reading weirdly fast (he typically blasted through a book a day) that was matched only by his general disregard for the rules of grammar and dislike for writing and composition. He graduated with a degree in Agricultural Engineering in 1952.

He was a civil engineer with the California Bureau of Reclamations and then the City of Los Angeles, work that supported his water intensive hobbies of skin diving, fishing, and driving fast boats when the lovely Myrna Rosenthal caught his eye at the Holy Redeemer Lutheran Church. They say that opposites attract, and it is clear that while the two had little in common (Myrna couldn’t swim and loved grammar), they proved to be inseparable for nearly 61 years. They married and had two daughters, Debbie and Deanna.

The strains of leading a family plastering business, the close proximity of parents and in-laws, and a nasty case of hay fever, led the young couple to seek out new frontiers. They discovered the city of Prescott in the pages of a library paperback called, “Safe Places West”. Based on the book’s descriptions and Lloyd’s childhood fondness for all things Arizona, Lloyd and Myrna traveled to the mile high city, bought a house on Terrace View Drive, and moved the family in 1973. Ever the optimist, Lloyd tried his hand at real estate, a business in which he had no training. But his innate interest in what makes people “tick” made him a natural, and he saw himself as a matchmaker between people and homes. He loved meeting people and would ask new acquaintances almost anything (often to the embarrassment of Myrna); people liked him back and would tell him almost everything (also to the embarrassment of Myrna). By 1976 he and three partners added Myrna as an office manager and opened Realty Associates of Prescott.

One of Lloyd’s first clients told him about a fledgling organization called YEI (Yavapai Exceptional Industries). Lloyd was deeply inspired by its mission to provide adults having disabilities with job training and work opportunities, and he volunteered for the board. Over the next 40 years, his efforts in YEI and as part of Prescott Charities helped YEI to expand from an old warehouse with 14 people to several award winning facilities and group homes that serve nearly 200. Lloyd loved meeting YEI families and was immensely proud that no donations were used to administer Prescott Charities.

The Lutheran church loomed large in Lloyd’s life. Young Lloyd and Myrna met at church and they made lifelong friends in Couples Club at Good Shepherd Lutheran Church in Downey. The young family gained a social foothold in Prescott through church activities and acquaintances, and Lloyd became deeply involved in the building and landscaping of the American Lutheran Church’s current home where he served in a variety of leadership and support positions.

Lloyd rarely hesitated when he wanted something, rapidly turning ideas into action. When his children were 9 and 11, he decided all should see the nation’s capital in Washington, DC.

He bought a truck with a camper shell, attached a trailer, packed as many books as possible, took 4 weeks off work and he drove his family coast to coast, visiting every person even distantly related along the way. A desire to see Chichen Itza, a need to see the top of Mount Whitney, and an eagerness to water ski behind a fast boat rapidly became extended family trips. Ultimately, a beautiful view at the top of a hill became a dream house for Lloyd and Myrna.

Go to www.hamptonfuneralhome.com if you would like to share a memory with Lloyd’s family. They will be celebrating his life at a Memorial Service at American Lutheran Church, on Sept. 27, 2019 at 1:30 p.m. Please, no flowers, but a donation can be made in Lloyd’s name to Yavapai Exceptional Industries, 436 N Washington Ave, Prescott, AZ 86301; yeiworks.com or a charity of your choice.