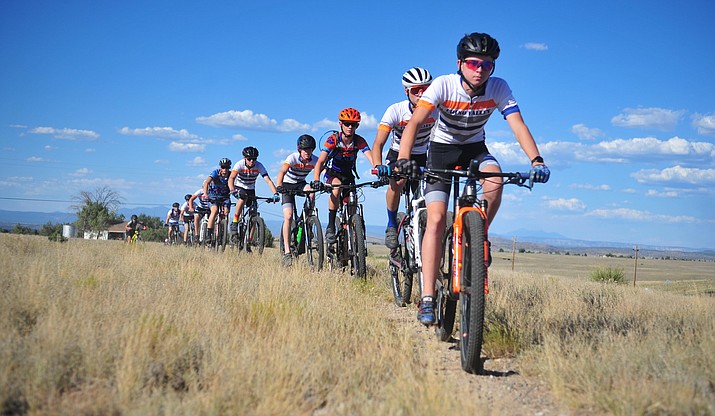 Chino Valley’s mountain biking team may have only one varsity rider for the 2019 season, but the squad’s showing depth at the JV-1 level, which should bode well for the future.

“All of them have been riding since eighth grade,” first-year Cougars coach Bugs Norbury said. “And they’re just pretty dedicated to the sport.”

At varsity, Chino Valley sends senior Caleb Hill into the fray. Hunter Hulburd will compete as a freshman.

“I had a friend that was doing it and it seemed new and kinda fun,” Hulburd said of mountain biking. “The coaches wanted new people to join, so I just went to a practice and loved it. I just want to do better [at riding] than I did last year as an eighth grader at Heritage [Middle School].”

No girls will be riding for Chino Valley in 2019, though, as the famous Dunn girls have graduated and their parents have moved on from coaching the team.

“We’ve struggled this year to get girls,” said coach Norbury, an assistant coach the past two years. “We tried and tried. We had one girl we thought we had, but she ended up doing cross-country.”

In JV-1, Preston Norbury’s expected to be a frontrunner in the Division II state ranks this season. Preston rides constantly, training four to five days a week. By sometime in 2020, Preston hopes to join AZ Devo, a local Club team.

“I just like the adrenaline rush that you get, like when you’re going downhill and you feel you’ve accomplished something after you get to the top of that hill,” said Preston, 15, who started riding during his eighth-grade year. “I would like to win the [D-II JV-1] championship this year. It’s a good experience. You get to hang out with different people and make friends from all the different schools.”

If given the opportunity, Preston would like to ride for a college mountain biking team after graduation. Coach Norbury, Preston’s dad, rode mountain bikes years ago before getting out of it for a while.

“Actually, in eighth grade, my kid saw one of the other kids carrying a bicycle helmet around,” coach Norbury recalled. “He said, ‘What do you have that for?’ And he goes, ‘Uh, mountain bike team.’ And then we just kind of got hooked from there.”

Coach Norbury said the riders who put a lot of work into cycling tend to succeed at it. The Cougars practice three times a week, including traversing Chino Valley trails on Tuesdays (15-mile rides) and Prescott’s Brownlow Park course on Thursdays and Saturdays (25-mile rides).

“The good thing about the whole league is there’s a spot for everybody,” the coach added. “It doesn’t matter if you’re a powerhouse or if you’re a kid just starting.”

“It’s a big family,” coach Norbury said of high school mountain biking in Arizona. “It doesn’t matter if you’re from Prescott or if you’re from Chino. You go to one of the races, and everybody cheers for everybody.”