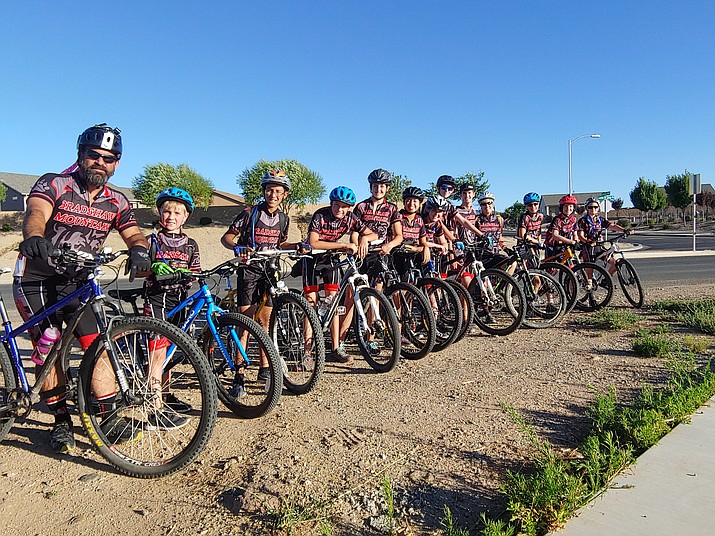 The 2019 Bradshaw Mountain mountain biking team prepares for a practice ride near the Iron King Trailhead in Prescott Valley in August. (Doug Cook/Courier)

When it practices, the 2019 Bradshaw Mountain mountain biking team puts in an hour-and-a-half of riding time during the week and 2-1/2 hours on weekends.

Bears coach Shawn Vaca schedules interval days on Thursdays, which are measured timed rides. On Tuesdays, they ride Brownlow Trail in Prescott to get familiar with that course, which is used for the Arizona Interscholastic Cycling League’s (AICL) second race of the five-race season.

“On weekends we can go on different trails – they’re kind of more fun out in the forest – and get some more technical experience,” Vaca said. “It’s an individual team sport, so you’re competing individually. You’re racing against your own time.

“But you also have the benefit of being on a team, so you have a team environment. Everybody cheers for each other.”

Bradshaw Mountain, which has 14 riders on its roster, including five middle schoolers, kicks off the 2019 campaign at 8 a.m. Sunday, Sept. 8, at Fort Tuthill County Park, 2446 Fort Tuthill Loop, in Flagstaff.

In the JV-1 division, Bears senior cyclist Mark Madler, 17, hopes to finish in the Top 10 in the final state rankings this season. He enters his fourth season for Bradshaw this fall.

“Ideally, Top 5,” Madler added. “After the first race, the positions are pretty hard to move through. There’s a lot of fast riders in JV-1.”

Over the summer, Madler won his age group in a 40-mile race in Taos, New Mexico, called the South Boundary Big Ride.

“This is his most competitive year,” Vaca said of Madler. “So, if he’s deciding that he wants to really try to compete, we want to facilitate that.”

Bradshaw Mountain senior cyclist Julie Lawrence, 17, who’s riding at the JV-2 level for girls, said her goal for 2019 is to finish in either the Top 20 or the Top 15 in the Arizona Interscholastic Cycling League’s (AICL) state series of races.

“It’s not super popular like the other [high school] sports are, and so I just like getting on a bike and riding super-fast and go for it,” she said.

The Bears, who ride at the Division I level, say they participate in the sport as much for developing their skills as they do for winning.

“Mountain biking’s what we do to develop good, young adults,” Vaca said. “I really emphasize fun and stewardship of the trails over competitiveness.”