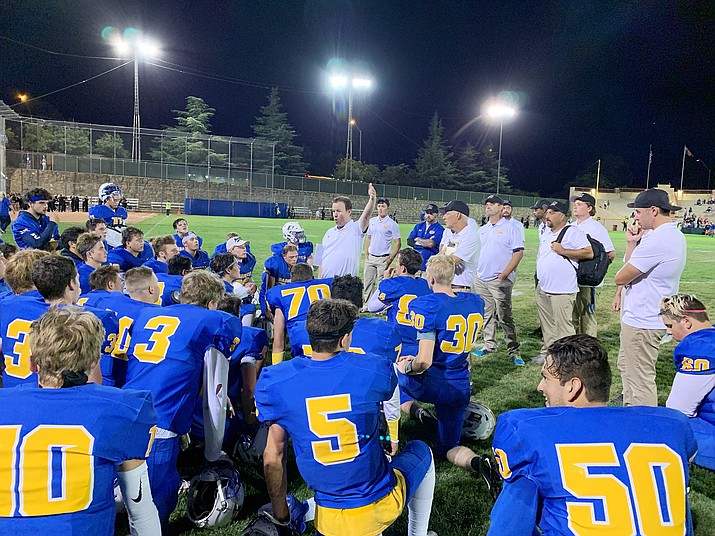 PRESCOTT — Dellin Boyd and Sam Giordan each scored two touchdowns in the first half to lead the Prescott football team to its first win of the season in a 48-6 rout over Moon Valley on Friday night.

It is the first win for the Badgers (1-2, 0-0 Grand Canyon) at Ken Lindley Field in downtown Prescott since the 1960s as Bill Shepard Field remains under construction during a $2.5 million facelift.

To open the game, Prescott made a statement defensively, forcing a Rockets fumble on their first possession before Giordan made it 7-0 with a 20-yard touchdown.

On the next two possessions offensively for Prescott, Boyd scored touchdowns on back-to-back drives, his second a 5-yard run to make it 20-0 Badgers with 10:46 to go in the second quarter.

And after Giordan made it 27-0 with his second touchdown run of the night with 4:47 left in the first half, Prescott was well on its way to victory.

“Coming out here and beating Moon Valley the way we did, we played hard and played as a team … it was one big team effort to get us there,” Giordan said on the field after the game. “It felt good to get [my] two touchdowns. Our offensive line did good tonight.”

Boyd said it was a “must win” for the Badgers, adding the squad had a good week of practice as he continues to learn the offense, making only his third-career start at quarterback Friday night.

“I’m definitely getting a lot more comfortable, but the offensive line has played great. I have a lot of time in the pocket and when I’m running they create holes you can put a bus through,” Boyd said. “I give all the credit to those guys.”

“He’s doing a great job, that’s his third varsity start at quarterback and he’s getting better every week,” Collett said, adding it was “important” to get a win over Moon Valley.

“I told the kids, everything feels better when you win, so it was nice to get a win. We played two tough teams [to begin the season] we felt we could beat, and we didn’t quite do it, but we were able to do that tonight.”

Collett credited the defense on holding Moon Valley (0-2, 0-0 Skyline) to only six points, which they scored in the final seconds of the game on a fake field goal try.

“Our defense has played pretty consistently all three weeks, I think. We’ve given up a few big plays, but with our style, that’s going to happen,” Collett said.

If all goes to plan, the next time Prescott plays a home game, it will be at newly refurbished Bill Shepard Field.

The Badgers are set to welcome rival Flagstaff for that Week 5 matchup Friday, Sept. 20, which is also homecoming week.

Phoenix-based Moon Valley has a bye week before hosting Lake Havasu in Week 5 on Friday, Sept. 20. Kickoff is set for 7 p.m.