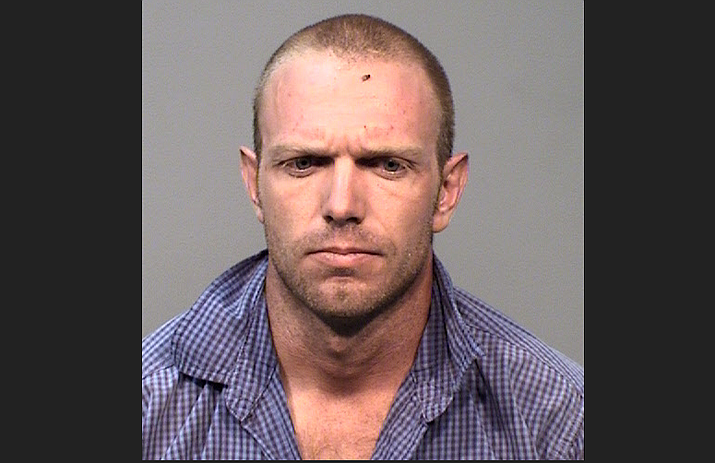 A Chino Valley man was arrested on drug charges in Prescott after gas station clerks called police to report the man was concerning them with his behavior Thursday morning, Sept. 5.

Clerks told police dispatch at 10:44 a.m. that the man had stopped at one of the gas pumps in a pick-up truck, started unloading items from the truck and then was pacing back and forth in front of the convenience store, according to a Prescott Police Department (PPD) news release.

They reported that the man had gone into the store several times to purchase different items and kept asking for cash back because “he needed a lot of cash,” but his card was declined. This reportedly lasted for about an hour before clerks decided to call 911.

Officers were dispatched to the gas station, which is located along Iron Springs Road, and arrived a few minutes after the call, according to the release. The first officer on scene found the man, later identified as 29-year-old Nicholas Kimball, inside the front door of the store.

As the officer walked up to Kimball, he noticed the handle of a revolver sticking out of Kimball’s front pants pocket, according to the release.

The officer reportedly asked Kimball to move outside the store so they could speak about Kimball’s behavior, but Kimball instead began quickly walking away from the officer.

Kimball was quickly detained and the gun was removed from his pocket and identified as a loaded .22 caliber revolver, according to the release.

Other officers arrived and began gathering information from the clerks as they attempted to question Kimball, “who was extremely agitated and kept asking to move to the other side of the building where he left a green bag of his belongings,” officers reported.

Officers searched Kimball and found he had marijuana and what appeared to be a “usable amount of methamphetamine” on him, PPD spokesperson Jon Brambila said. They also found a fully-loaded rifle magazine containing .308 ammunition and a plastic case containing .22 caliber rounds and multiple knives.

Kimball’s vehicle was then searched. In it officers found a fully loaded Ruger SR762 .308-caliber semi-automatic rifle along with a load-bearing vest that had three additional magazines for the rifle, according to the release. They also found a green bag and a bed roll belonging to Kimball near the gas station’s dumpster.

Inside the bed roll was a loaded 30/30 lever action rifle and a .22-caliber rifle with one round in the chamber and additional ammunition on the ground nearby, according to the release. Inside the green bag were items consistent with wilderness survival, such as food, camping stoves, water filters, clothing and gun cleaning supplies.

Clerks then led the officers to an area behind the dumpster where they saw the suspect earlier in the day. There they found a fully-loaded 1911 .45 caliber handgun laying on the ground. The gun had its hammer pulled back in the cocked position ready to fire, police said.

The entire area was thoroughly searched and no other firearms were located. All of the firearms and Kimball’s truck were seized as evidence, police said.

Kimball was arrested and transported to the PPD, where he was interviewed by detectives about his behavior and the weapons, according to the release.

“The suspect did not provide any additional information as to why he had so many weapons and why they were placed at strategic locations in the parking lot of the gas station,” Brambila said.

“We have often discussed with our community the need to call if you see something that is suspicious,” Brambila said. “Without the public’s help on the case, we may not have located this suspect and taken him into custody without incident. If you see something say something.”

If anyone has any additional information about this case or the suspect, they are encouraged to call Detective Mike Kinsey at 928-777-1988.