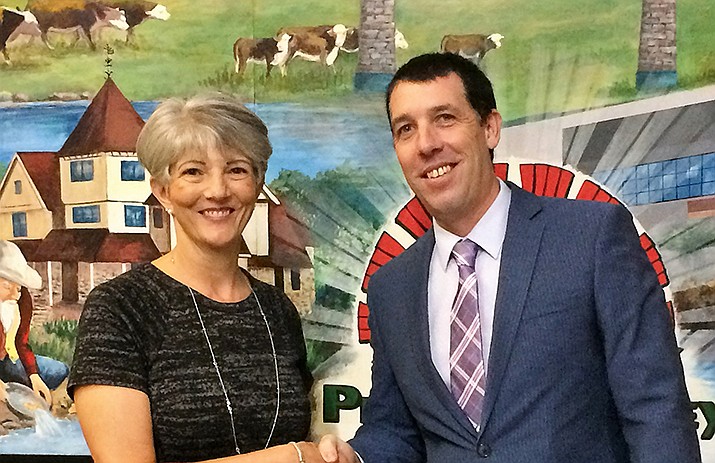 In a majority vote, the Prescott Valley Town Council chose its newest member — Lori Moss Hunt — who brings with her 30 years of experience in government, most recently as community development director with Sacramento, Calif. Her term will run through December 2020.

Mayor Kell Palguta praised the time and effort all three applicants put into the interview process and encouraged all to remain involved in the 2020 election cycle. The two other applicants were Brenda Dickinson and Mary Williams. The seat was vacated earlier this summer when Mary Mallory accepted a position on the Yavapai County Board of Supervisors.

“Even though only one will be picked tonight, each one of you would be an outstanding council person,” Palguta said.

Town Clerk Diane Russell announced at the Sept. 5 council study session that Hunt received the majority of the votes. The interview process in which the applicants answered six questions took more than an hour.

The questions included what role a council member plays in town government, programs to add or eliminate, recommendations to improve the town’s efforts toward economic development, the Big Chino Ranch and whether the candidates are able to attend meetings and travel.

From the answers, it was evident all three candidates had done extensive research into each area, as they provided a comprehensive background on many of the questions.

Williams brought up the lack of a community-wide cemetery and suggested partnering with Yavapai County, Prescott Valley Community Development and Parks and Rec departments. As a nonprofit, citizens could contribute with memorial trees, benches and brick pathways to help with costs.

All three commended the efforts of the Prescott Valley Economic Development Foundation for bringing commercial and industrial business to the area. Williams suggested actively promoting Yavapai Regional Medical Center and updating the aerial photographs on the town’s website.

Dickinson mentioned the town’s success at repurposing many of the empty big box buildings, and suggested the need for additional hospitality businesses such as another hotel. Hunt thanked the council for taking the event center out of bankruptcy, and again mentioned the need for the Big Chino Ranch pipeline.

The final question sought the applicants’ thoughts about the town’s water-resource plan that includes importation of water from Big Chino Ranch. All three support the plan.

Dickinson said water is a shared resource and therefore needs management and planning. The town’s tiered water rates helped with water conservation. Pumping water from the Big Chino reservoir will have no impact because 80 years of irrigation from the Big Chino has not impacted it. She wants the town to be proactive and build the pipeline.

Williams also complimented the town’s efforts to conserve water, and said it wasn’t enough. Moving forward with the pipeline is vital, she said. Hunt called the Big Chino project a brilliant idea and a long-term insurance policy. Potential businesses will see it as an incentive, and the project will generate jobs.

Fourteen applicants applied for the seat and spoke to council members at the Aug. 15 work study session. Council then narrowed the applicants to the three finalists. Hunt will be sworn in at the Sept. 12 council meeting.