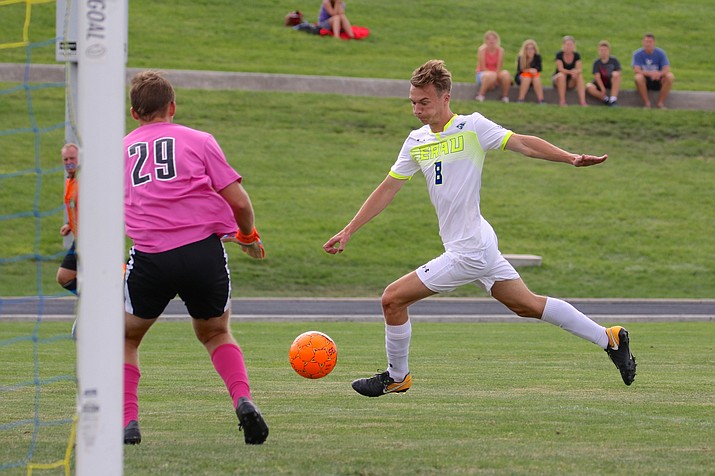 PRESCOTT — Embry-Riddle Aeronautical University men’s soccer team battled with University of Providence (Montana) for a total 110 minutes but were forced to take their second tie of the season after controlling a lot of the play.

ERAU (1-1-2) played extremely aggressive early and forced the Argos (1-0-1) to play strictly off the counter attack. For the first time this season the Eagles took hold of the lead in regulation after Jacob Baker (JR/Graham, Wash.) got his first goal of the season. After Mason Laaksonen (SR/Austin, Texas) found space on the right wing, he played a low ball toward the front post where Baker played it with a back heel past the keeper. The Eagles held the lead for only 13 minutes before the Argos countered and evened it up. The half ended at 1-1.

The Eagles controlled the second half before a beautiful slip sent UP in on Alastair Stark (SR/Sevenoaks, England) to get the lead. ERAU needed to send all of its men forward to create more chances. A big ball from the back line sent Sergio Monteiro (JR/Malaga, Spain) toward the byline where he muscled passed his defender and floated a ball to the far post where Lucas Garcia (FR/Barcelona, Spain) was waiting. Free as a bird, Garcia hit it with a pure left stroke and snuck it by the keeper with only 43 seconds left in regulation.

In the first extra period, Garcia had the best chance of either team. Garcia had the ball fall to him just outside the 18 yard box and hit it hard past the keeper and off the cross bar. ERAU could not find its rhythm after that and managed the 2-2 tie.

Baker got his first goal of the season after leading the Eagles in goals last season. Garcia, now has a pair of goals to his name, both coming in the last two matches. Laaksonen has a point in consecutive matches.