How to improve your chances of winning carnival games 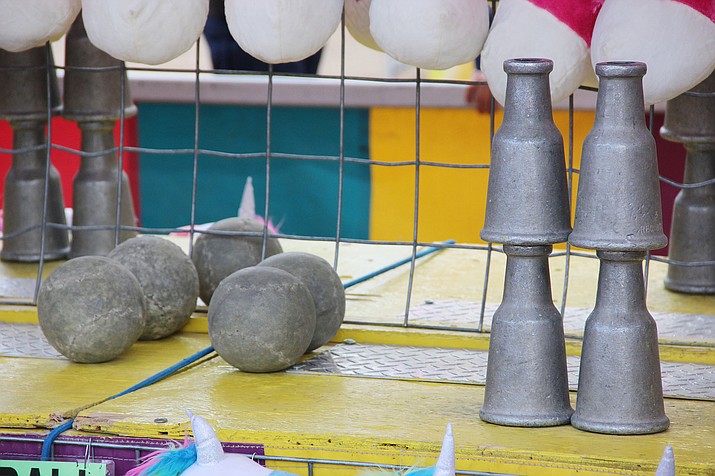 One Shot is one of 10 carnival games offered at the 2019 Yavapai County Fair. The objective is to knock all four metal pins over with the single toss of a softball. (Max Efrein/Courier)

No one ever said carnival games were easy — at least not when it comes to winning them.

They traditionally lure passersby in with seemingly simple tasks and giant, stuffed animal prizes, but many who choose to play walk away empty-handed either regretting the decision or hungry to try again.

“You hope for the best and expect the worst,” said Dino Allen, who visited the Yavapai County Fair with his wife, Tiffany, Thursday, Sept. 6.

Though there isn’t a sure-fire way to win most carnival games, there are some rumored strategies for the following games that can improve your chances of taking home the prize you’ve got your eyes on.

Shoot Out the Star

Considered one of the most challenging carnival games, Shoot Out the Star is where someone armed with a stationary BB machine gun must completely obliterate or detach a red star from a piece of hanging paper in order to win a prize.

For this one, various internet sources suggest shooting around the star so it falls out of the paper rather than trying to blow it to pieces. Keep in mind that the gun barrels aren’t always dead-straight, so it’s important to adjust your aim based on where the BBs are hitting rather than what the site is telling you.

This one looks simple enough, but after a couple tosses, it’s clear that multiple factors are playing against you.

The objective of the game is to toss Frisbee-sized rings onto the necks of giant rubber ducks circulating in a pool of water. To win, the ring must settle entirely onto the duck’s neck and can’t hang partly off or be caught on the duck’s bill.

The reason this is difficult is because the rings are just barely large enough to slip over the duck’s bill and they’re made of flimsy plastic material that causes them to easily get swept off track by even the slightest of breezes.

To improve your chances of winning this game, you want to slightly angle the ring upward when you toss it and aim for the front of the duck’s face rather than the top of its head so it slips past the bill. You may also want to wait until the wind dies down before letting it fly.

Once again, it appears easy, but in order for all of the bottles to fall, the ball — which is about the size of a regular softball, but much softer — has to hit at precisely the right spot. Though people commonly believe this to be the spot where all of the bottles intersect, online sources say it’s actually more effective to hit between the two bottles at the bottom.

In Water Gun Fun, players sit in a row and continuously shoot water at a tiny target using a water cannon. As the water hits the target, it raises a platform. When the platform gets high enough, it rings an alarm indicating who won. The more players you beat in a round, the larger the prize you win.

For this one, the trick is simply to line up your shot before the game even starts. And if you know the person next to you, maybe try to distract them so they get a late start.