A closer look at Yavapai County Fair’s carnival games
The bigger the prize, the more challenging the game 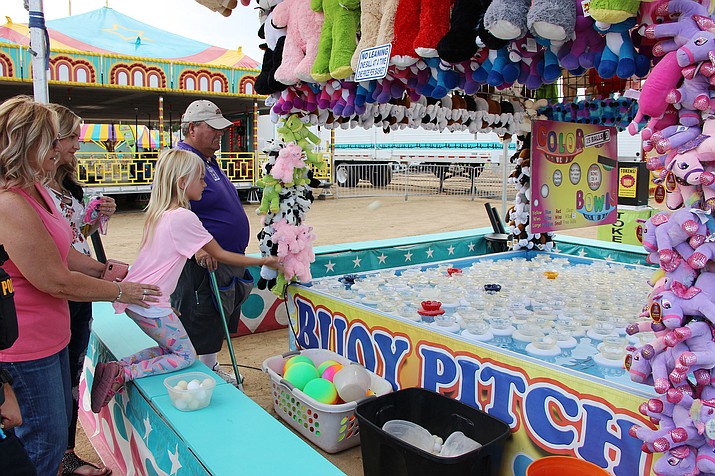 Every summer, colorful lights and the smell of deep-fried confectionaries attract thousands of people to the Yavapai County Fair.

While some may go just to scream on rides like the Zipper, others like to dabble in all aspects of the event, including the carnival games.

All of the rides, games and much of the food offered at the Yavapai County Fair — at the Prescott Rodeo Grounds — this year are provided by Brown’s Amusements. Owner Danny Brown said when it comes to the games, he tries to provide a healthy mix of challenging, achievable and guaranteed.

“The game industry has changed over the years,” Brown said. “Most of the games we have out there are either ‘prize every time’ or they’re not very difficult at all.”

Since Brown usually provides carnivals for small county fairs in semi-rural areas like Prescott, he strives to build trust among generational families and remain relatively transparent with his offerings.

“We see the same people year after year, and so our goal is to never make them feel like they got robbed,” Brown said.

The “prize every time” games Brown referred to, such as Duck Pond, where you simply select a small rubber duck from a pool of water and find out what size prize you get based on what is written on the bottom of the duck, hold up to their promise. As long as you pay the price to play, you’re guaranteed a toy of some kind. With some of these, the more money you spend, the better prize you get.

“It’s just like going to a department store,” Brown said. “There’s all kinds of qualities of different products you can buy. The more money you spend, the better item you’re going to get.”

Then there are games that require multiple players and only the top scorers win. One such game is Roll-a-Ball, where players roll little white balls into holes marked “slow” or “fast.” Every time a ball goes into a hole, it moves a figurine of a horse and jockey along a racetrack. The more players you beat in a round, the larger the prize you win. Games like this are considered achievable, because you’re playing against other people rather than trying to beat the carnival game itself, where — similar to gambling — the odds are never in your favor.

The more challenging games are ones like Shoot Out the Star, where the entirety of a red star must be shot from a card using a BB machine gun to win a prize. Another is called Ring-a-Duck, where the objective is to toss Frisbee-sized rings onto the necks of giant rubber ducks circulating in a pool of water.

With these type of games, a significant amount of luck is required to win a prize, but there often is some strategy involved to at least give yourself a fighting chance. To learn about some of these strategies, read the accompanying article titled “How to improve your chances of winning carnival games.”

Brown said the rule of thumb to keep in mind when picking a game to play at the fair is the larger the prize, the more difficult the game is.

“There’s no hidden secret about it,” he said. “So if you come up to a game and it’s got a big prize, it’s just a tougher game.”