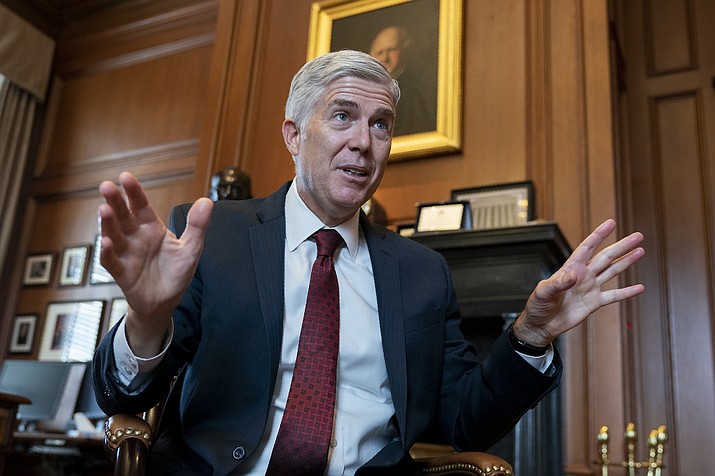 Associate Justice Neil Gorsuch, President Donald Trump's first appointee to the high court, speaks to The Associated Press about events that have influenced his life and the loss of civility in public discourse, in his chambers at the Supreme Court in Washington, Wednesday, Sept. 4, 2019. Gorsuch has written a new book on the importance of civics and civility, and a defense of his preferred originalism method of interpreting laws and the Constitution. (AP Photo/J. Scott Applewhite)

WASHINGTON — Justice Neil Gorsuch is following the path of Supreme Court colleagues-turned-authors in a new book in which he laments the loss of civility in public discourse.

The 52-year-old justice wrote "A Republic, If You Can Keep It" because Americans should remember that their political opponents "love this country as much as we do," Gorsuch said in an interview with The Associated Press in his Supreme Court office. The book is being published Tuesday.

But Gorsuch had little to say about President Donald Trump, who appointed him to the Supreme Court and who routinely brands his opponents dopes, losers, liars and worse.

"If you're asking me about politics, I'm not going to touch that," Gorsuch said.

All Gorsuch would say about Trump is that during the nomination process in 2017, the president "was very gracious to my family."

Penguin Random House gave Gorsuch a $225,000 advance for the book, a collection of speeches, essays and judicial decisions. Gorsuch also sets forth his view of the proper role of each branch of the federal government — the presidency, Congress and the courts — and defends his originalist approach to interpreting laws and the Constitution according to their meaning when written.

He is the latest justice, following Sonia Sotomayor, Ruth Bader Ginsburg, Clarence Thomas and Stephen Breyer, to write a book while on the court.

Seated in his corner office a little over a month before the Oct. 7 start of the new Supreme Court term, Gorsuch appeared relaxed and upbeat. He showed off a plaque he brought back from his summer teaching sojourn in Padua, Italy, signed by "the boys" of the local police station. He'll travel to California and Texas to speak about his book at the Richard Nixon library and George W. Bush presidential center before the term begins, in addition to speaking at the National Archives in Washington.

One theme of the book is a common refrain among the justices when they speak in public, especially in the aftermath of Justice Brett Kavanaugh's tumultuous Senate confirmation hearings: Judges are not politicians in robes, even if their decisions in high-profile cases often can be predicted based on the president who appointed them.

In November, Chief Justice John Roberts offered a plain-spoken rebuke to Trump after the president described a judge who ruled against his asylum policy as an "Obama judge." ''We do not have Obama judges or Trump judges, Bush judges or Clinton judges. What we have is an extraordinary group of dedicated judges doing their level best to do equal right to those appearing before them," Roberts said in response to a question from the AP.

While Gorsuch avoids personal attacks, he takes aim at judges and legal scholars who prefer a "living Constitution" that adapts to the times over the originalist view.

Among the criticisms of originalism is that the Constitution, as Breyer has said, uses broad language that the founders knew would have to be flexible to changes in society. Another is that originalism almost always leads to outcomes preferred by conservatives. "Baloney. Rubbish," Gorsuch said. "You know, the living Constitution is going to take your rights away and it's going to add ones that aren't there. ... We have a written Constitution. It's about honoring the words the people chose to adopt. What are the first three words of the Constitution? It's 'We the people,' not 'We the states,' not 'We the nine old judges.'"

It's the same sentiment he expressed in a speech to the conservative Federalist Society in 2017. "Originalism has regained its place at the table of constitutional interpretation, and textualism in the reading of statutes has triumphed. And neither one is going anywhere on my watch," he said then to thunderous applause.

In his book, Gorsuch makes a plea for kindness and manners, recounting advice from the English grandmother of his wife, Louise, who told him that he would regret things he did and things left undone, but that he would never be sorry for being kind.

And he notes that George Washington had to copy by hand all 110 rules of civility that were written by the Jesuits in 1595. In the interview, Gorsuch paraphrased one rule that he particularly liked.

"Do not speak so closely to another person with such enthusiasm that you bedew the other man with your spittle," he said, from a safe distance. "It's a good rule. It's a good rule."