No. 23 Stanford and USC headline Pac-12 this week
College Football 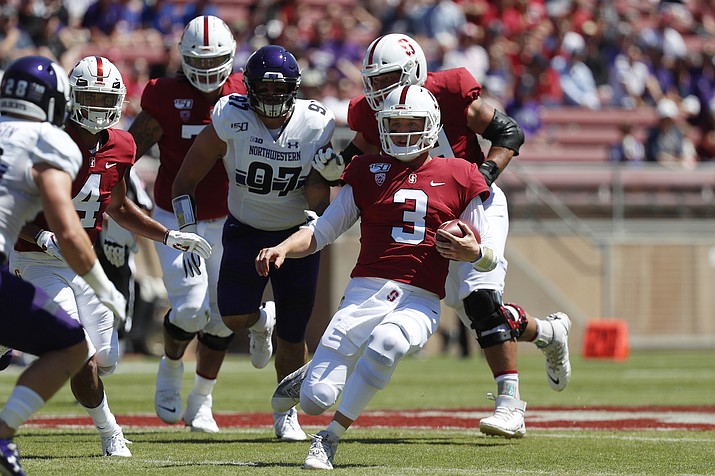 Here are some things to watch in the Pac-12 Conference this week:

GAME OF THE WEEK

No. 23 Stanford (1-0) at Southern California (1-0). Both teams could be missing their starting quarterback Saturday in a game between teams expected to contend for their respective divisions. The Trojans of the South Division certainly will be without J.T. Daniels after he suffered a season-ending right knee injury in the opener against Fresno State. USC will turn to freshman Kedon Slovis against the Cardinal. Stanford’s quarterback situation is unclear after K.J. Costello was struck in the head in an opening 17-7 win over Northwestern. Junior Davis Mills went 7 for 14 for 81 yards after replacing Costello, who is questionable against USC. The rivalry dates to 1905.

MATCHUP OF THE WEEK

San Diego State (1-0) at UCLA (0-1). The Bruins have dominated a series that dates back nearly a century, leading 21-0-1 while outscoring the Aztecs 695-241. UCLA is still trying to gain its footing under coach Chip Kelly. The Bruins went 3-9 in his first season and opened 2019 with a 24-14 loss to Cincinnati after sophomore quarterback Dorian Thompson-Robinson had four turnovers. Other than its drought against UCLA, San Diego State has had some success against Pac-12 schools, winning four games against schools from the conference since 2016. So you’re saying there’s a chance?

Pac-12 kickers went 15 of 19 in the opening week, including 9 of 10 from 40 yards or more. ... Washington State senior Anthony Gordon had quite a debut, throwing for 420 yards and five TDs on 29-of-35 passing against New Mexico State. The Cougars play Northern Colorado on Saturday. ... Washington has won 15 straight home games heading into Saturday’s matchup against California. ... No. 16 Oregon has won 14 straight home openers heading into Saturday’s game against Nevada. ... Utah’s Zack Moss has 2,838 career rushing yards, 381 shy of the school record set by Eddie Johnson from 1984-88.

No. 25 Nebraska (1-0) at Colorado (1-0). The former conference rivals renew their rivalry in Boulder for the first time since 2009, a year before Colorado left the Big 12 for the Pac-12. The Buffaloes rallied to beat the Cornhuskers in Lincoln last season and knocked out Nebraska quarterback Adrian Martinez with a knee injury in the fourth quarter. The Huskers suspected the injury was no accident, adding a tinge more bad blood between teams who already don’t like each other much. Nebraska opened the 2019 season with a 14-point win over South Alabama and the Buffaloes routed in-state rival Colorado State in their opener.

Pac-12 this Week: California trying for upset at No. 13 Oregon
Around the Pac-12: Injuries lead to shuffling QBs
Preview: Stanford seeks revenge vs. USC in Pac-12 title game
Pac-12 this Week: No. 21 USC looks to continue momentum at No. 17 Washington
Preview: Arizona State at No. 21 Colorado tops the Pac-12 this week