County questions how to best use CodeRED system
What is an ‘emergency’ for smaller communities? 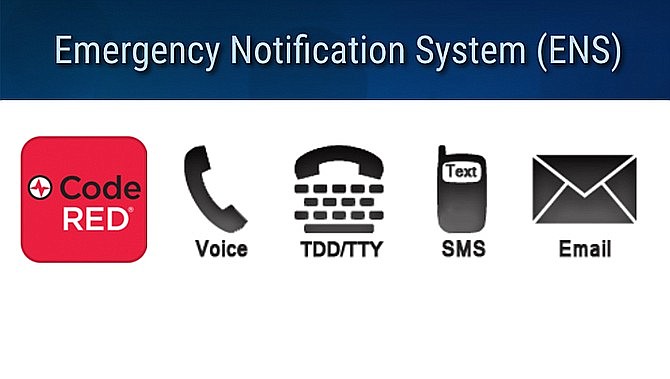 YCSO Sheriff Scott Mascher said he uses CodeRED about twice a month for incidents involving immediate threats to life and property. One of the largest uses of the system was during the evacuation of 7,000 people threatened by the 2017 Goodwin Fire in Mayer. More than 70,000 people subscribe to CodeRED, which also is used for Silver Alerts and missing children.

During a discussion on a contract renewal of the CodeRED emergency notification system at the Sept. 4 Yavapai County Board of Supervisors meeting, the question of what constitutes an emergency came up.

Board Chairman Randy Garrison, who fully supports the use of CodeRED and the contract renewal, said he had some concerns with how the system is utilized. Garrison is supervisor for District 3 which encompasses Jerome, Clarkdale, Cottonwood, Village of Oak Creek and parts of Sedona.

Garrison said he is troubled by having to rely on three different forms of notifications for his district — CodeRED, NIXLE, and messages from the county emergency management director — instead of obtaining information from one source.

He gave a recent example where a fire closed off Highway 179; he got the news from a NIXLE message. Garrison said he considered that knowledge vital to anyone in the Villages of Oak Creek who experienced an emergency because an unknown road closure at one end of the community means residents must turn around and drive to the other end to get out and then circle back around.

“That, to me, is a problem,” he said, adding that the Yavapai County Sheriff’s Office (YCSO), which monitors CodeRED, didn’t know about the fire or highway closure, yet there is a substation nearby and deputies would have been aware of the situation if CodeRED was a viable notification option. “How can we bring this CodeRED system to be more valuable?”

County residents sign up to receive emergency notifications through CodeRED. They can choose which delivery mode as a primary contact: telephone (landline and cell), email and/or text messages. It is a secure system and participants can opt out at any time.

NIXLE is a similar communication system used by public safety and municipalities as well as school districts, businesses and communities. Alerts include crashes that close roads to traffic, such as the one issued Aug. 15 in Sedona about a semi-truck blocking traffic in both directions on Highway 89A.

Yavapai County Sheriff Scott Mascher said he uses CodeRED about twice a month for incidents involving immediate threats to life and property. One of the largest uses of the system was during the evacuation of 7,000 people threatened by the 2017 Goodwin Fire in Mayer. More than 70,000 people subscribe to CodeRED, which also is used for Silver Alerts and missing children.

The agency’s policy is to use it strictly for life and property issues, Mascher said, not traffic issues or accidents on highways. If he were to do so for Prescott traffic, he said he would be using it every day. Two years ago, he sent a notification out about a scam plaguing county residents, and received a lot of complaints from people saying “That’s not what this system is for.”

In the case of Sedona, Mascher explained that 911 calls go through the Sedona Fire Department dispatch; YSCO is not tied into those calls. Part of Sedona is located within Yavapai County, other parts are in Coconino County. Together with the city, that makes three municipalities operating their own emergency systems. He said he offers access to Yavapai County’s CodeRED system free to all municipalities.

Garrison, as well as the rest of the supervisors, approved the CodeRED contract renewal. “I’m just trying to open the conversation,” he said.

In other business, the board approved:

$5,000 for fencing to secure an outside medical waste storage unit for the Medical Examiner’s office;