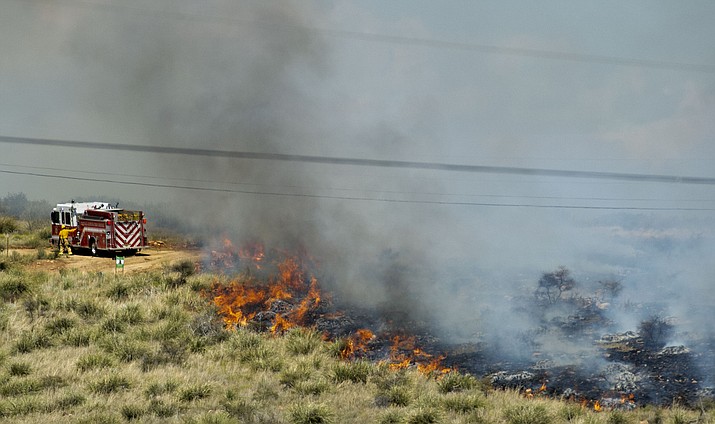 Firefighters from Cental Arizona Fire & Medical arrive at a wildland fire in the 9400 block of Chestnut Hill Ave. in the upper Blue Hills area of Dewey Wednesday, Sept. 4, 2019. (Les Stukenberg/Courier)

The fire was started accidentally by someone cutting metal shortly before 11 a.m., according to the Central Arizona Fire and Medical Authority (CAFMA). Sparks from the cutting caused light grasses in the area to catch fire, the agency reported.

Crews gained control of the blaze by about 11:45 a.m. and continued extinguishing hotspots until about 1:30 p.m., CAFMA Battalion Chief Todd Abel said.

About 1.65 acres of grassland was burned and an abandoned mobile home was destroyed by the flames.

Agencies that assisted with the fire were the Prescott Fire Department, the Prescott National Forest, the Arizona Department of Forestry and Fire Management, Life Line Ambulance and the Yavapai County Sheriff’s Office.