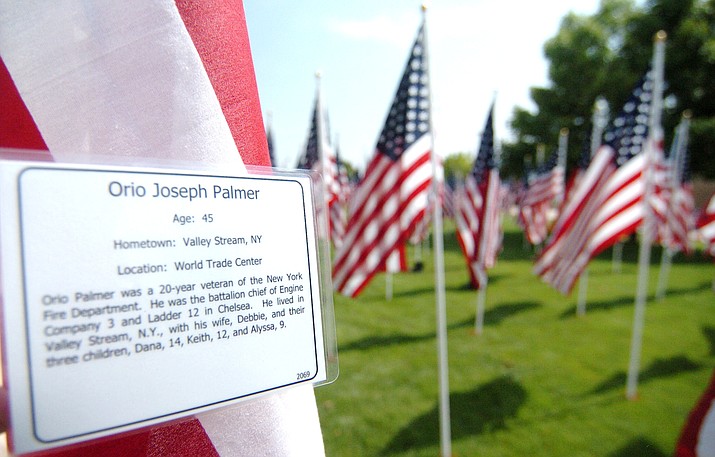 For the past seven years, a field of 3,000 U.S. flags fluttering somberly in the breeze has portrayed the “sheer enormity” of the loss of Sept. 11.

The community has come together since 2012 to set up flags and biographies on the grounds of the town’s Civic Center, 7501 E. Skoog Boulevard, to commemorate each of the nearly 3,000 people who died as a result of the terrorist attacks of 2001.

This year, the eighth annual Prescott Valley Healing Field will heighten the impact even more – with the addition of photos of the victims.

The event is open and free to the public. The field is open 24 hours a day.

Mallory well remembers the impact that a 2011 visit to the Tempe Healing Field had on her. That project’s 4,000 American flags left an impression that propelled Mallory to make a presentation to the Town of Prescott Valley about starting a similar effort in the town.

What followed was community-wide fundraiser to raise $60,000 to get a Healing Field underway. By 2012, the first Healing Field was in place, with 1,500 flags.

The next year, the field had grown to 3,000 flags — commemorating each of those who died in the attack on the World Trade Center, the Pentagon and the surrounding areas.

Also included on the Field of Flags are 19 Granite Mountain Hotshot flags honoring the 19 who died fighting the Yarnell Hill Fire on June 30, 2013.

This year, the bios of the people lost will take on a new dimension with the addition of photos.

Heidi Dahms Foster, the town’s communications relations coordinator, noted that each of the flags has had a card with information about the individual victim. “In the past, those cards did not have a photo of the person,” she said.

This year, the bio cards needed to be replaced, and over the past year, Deputy Town Manager Ryan Judy worked to find photos of the victims, Dahms Foster said. Volunteers then spent hours laminating each of the pictures.

The photos, along with the biographical information about the victims’ lives, will serve to make the victims even more real for the people who visit, many of whom are schoolchildren, Dahms Foster said.

Volunteers will gather at the Civic Center on the morning of Sept. 6 to set up the flags and bios, Mallory said, and the field will stay in place until Sept. 13.

“There has been an amazing amount of community help,” Mallory said, estimating that anywhere from 1,000 to 3,000 people have helped over the years.

Not only do the volunteers take on the task of putting up the flags, but they also do constant housekeeping the field. Mallory said the wind can sometimes wreak havoc on the flags, and volunteers are on hand “all day long, seven days a week” to keep the field in order.

The Healing Field serves as a backdrop for the annual ceremony commemorating Sept. 11.

Packard said this year’s ceremony will begin at 6 p.m., Sept. 11, with an honor guard. The keynote speaker will be Patty Mack, retired captain, New York Court Officers Academy. The ceremony will conclude with the lowering of the large flag on the roof of the Civic Center.