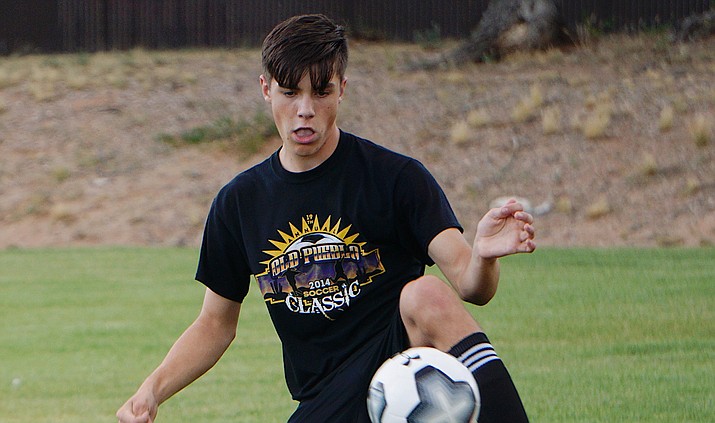 CHINO VALLEY — One of the worst feelings in sports is coming up just short of a championship. On the flip side, one of the best feelings is using that loss as motivation and coming back the very next year to win it all, something Chino Valley boys soccer is hell bent on accomplishing this upcoming season.

It’s been three years since the Cougars last won a state title and for the past two years, back-to-back champs Phoenix Country Day have eliminated them twice with the most notable occasion coming in last year’s championship match. This has undoubtedly left a bad taste in the Cougars’ mouth but head coach Todd Carey said the team has recovered nicely over the offseason and is gearing up for another title run.

“Overall, last year was a lot of fun but it was a lot of work trying to keep the guys focused during the season,” Carey said. “This season so far, I know we’re still early on, the guys seem very focused, they seem really good and seem really eager to learn. It’s a whole different style out here but they’re really understanding a lot of stuff and they’re eager to learn and they’re eager to put in the work.”

While the determination to succeed isn’t lacking by any stretch, this year’s Cougars will potentially look a bit different than years past.

For one, the team lost nine seniors to graduation last year, with six or seven of having been a starter, according to Carey. The core group of players this season will now feature mostly juniors, sophomores, and some seniors, but the key returners believe Chino Valley’s youth won’t stop them from being competitive.

“We lost a lot of seniors, first of all. Most of them were starters but that’s going to make us work harder for it,” said junior forward Angel Sanchez, who scored over 30 goals last season. “We’re going to have to play more as a team, communicate more and score more goals obviously.”

Carey also said that his tactics will be slightly different this season as he plans to implement more of a possession-based style rather than a run-and-gun style the Cougars are typically known for. This includes experimenting with an entirely new 3-5-2 formation in hopes of retaining possession in the midfield and clogging up passing lanes on defense.

“Typically, we’ve been a 4-4-2 or a 4-3-3 formation … but this year, we’re going to open up to a 3-5-2,” Carey said. “One of the reasons for that is because I feel like I need to get another forward up there … And also this year I really think we have the right personnel to have a three-back system. It allows us to clog the middle with five midfielders, which I absolutely love and essentially it allows us to have those two forwards up top”

Along with having Sanchez as their go-to guy on top, the Cougars can rest assure they will be in good hands throughout the rest of the lineup. Despite them only being sophomores, Carey said he is confident enough in the abilities of Ravi Holladay, Ricardo Juarez-Flores and Andy Nava to man the back line. As far as midfielders go, junior Quade Kellerman, senior Jesus Ayala and senior Ethan Addy are all primed to have big seasons.

“We have a lot more new guys but I think we actually work better together than you think we would … And I think last year, we were more just straight penetration and a bunch of through balls, but with this new formation that we’re doing, I think we’re going to have a lot more possession and actually win the ball,” Kellerman said on how well the team will adapt to Carey’s new strategies.

Chino Valley’s schedule this year will see more away games than home games. Out of 12 games, eight of them will be on the road including a stretch of five matches lasting from Oct. 2 to Oct. 21.

The season opener will be a non-section road game against Show Low on Wednesday, Sept. 4. The Cougars will then immediately switch gears to 2A Central action beginning with a home game against Payson on Sept. 17.

Chino Valley is not scheduled for a highly anticipated rematch against Phoenix Country Day during the regular season. However, it is very likely the two sides will meet again in state and should that happen, the Cougars will be as ready as ever to overcome the thorn in their side.

“With a young team this year, we’re going to be asking a lot out of them to win on the road. But we just have to win our regular season games, which we should be able to win quite a few of them, if not all of them.” Carey said. “I put it out there to the guys that there’s not a game on our schedule that we shouldn’t win. So hopefully, we’re able to perform well and be consistent enough through the season and then anything can happen in the [state] tournament.”