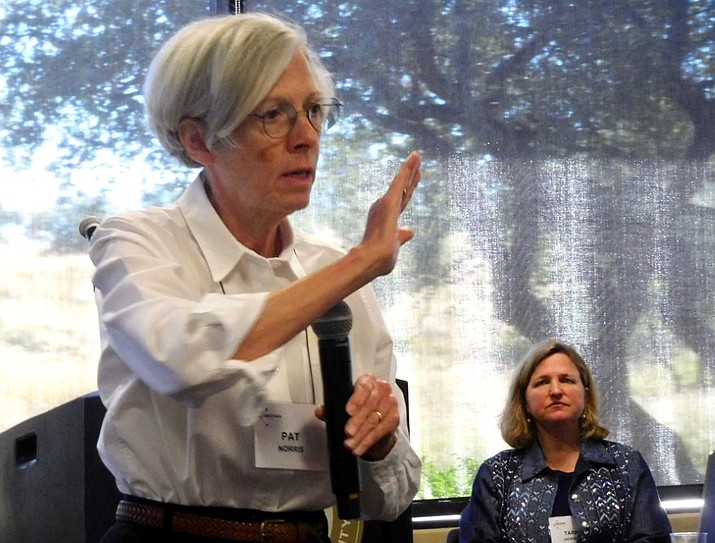 Arizona Town Hall Board of Directors chairwoman Pat Norris, left, will lead participant discussions during a town hall in Prescott on Friday, Sept. 6. ATH President Tara Jackson, right, will collect recommendations during the meeting and include them in the statewide ATH report to be compiled in November. (Ray Newton/Courtesy)

As part of its effort to collect representative data from throughout Arizona, leaders from Arizona Town Hall (ATH) are conducting a public town hall in Prescott from 8:30 a.m. to noon Friday, Sept. 6.

The location is The Hangar in the Student Union Building at Embry-Riddle Aeronautical University (ERAU).

ATH President Tara Jackson said the Prescott town hall is one of several being conducted across the state to gather data that will become a part of the major 112th statewide town hall on Nov. 14-16 in Phoenix.

“Opinions and recommendations from Prescott-area residents are critically important when we view issues concerning healthy development of families and children in the state,” Jackson said. “These views will become part of a cumulative report we assemble that represents citizens from throughout Arizona.”

Jackson noted that there are challenges facing Arizona’s families about which she hopes Prescott residents will share thoughts and recommendations. Among them:

• 24% of Arizona children are in poverty compared to 19% nationally;

• Arizona student graduation rate from public high school is 80%, whereas the national average is 84%.

“We in Arizona need to use our collective strength to solve these challenges,” Jackson said.

She emphasized that ATH is a nonpartisan, non-political organization that has as its primary mission the gathering of information about crucial issues that affect the state. Those reports then are shared statewide with elected and appointed leaders, with educators, with mass media and with influential groups and organizations that have impact upon public policy.

Persons attending the meeting at ERAU are asked to check in at 8:30 a.m. A continental breakfast is available.

ERAU Chancellor Anette Karllson will welcome participants at 9 a.m. Jackson then will introduce town hall speakers, including The Honorable Pat Norris, a retired Arizona Court of Appeals judge who was elected chairwoman of the AZT board of directors this past spring.

Also speaking is Prescott Mayor Pro Tem Billie Orr, who is a board member for ATH. She will share information from a comprehensive background report prepared by the Arizona State University Morrison Institute. Copies of that report will be distributed during the meeting.