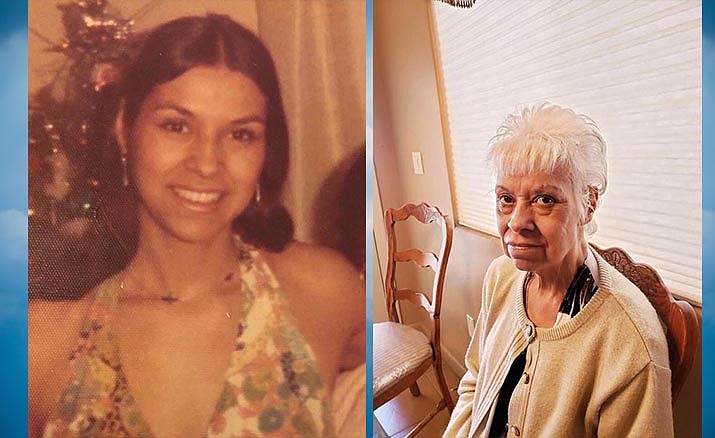 Martha Evelyn Ronchetti (nee Tellez), of Prescott, Arizona, passed away peacefully in her sleep on Aug. 30, 2019. Martha was born March 8, 1945, in Los Angeles California, to Josephine and Romolo (Ray) Tellez.

She was the fourth of five children. Her most cherished memories were the family memories - vacations in Crestline, Catalina, Crystal Lake and San Clemente. Family Christmas gatherings with the huge extended family and so many presents they could not fit under the tree! Her big brother Danny was the jokester, and once left Marty in tears when he told her the chicken they were all enjoying for dinner was her pet that their Mom decided to put in the stew pot! She and her younger brother David, sending in cereal box tops to collect secret agent rings!

In her teenaged years she and her sister Irene enjoyed going out Salsa dancing. Their father complained that on Sunday mornings, after the Saturday dances, the phone would not stop ringing - “Do you girls write your phone number on your teeth so the boys see it when you smile?” Good times! Martha always had a dream to travel the world and live overseas.

When she was 20 she met Peter (Ron) Ronchetti from England, and they were married in the summer of 1965. After a honeymoon in Baja, Martha moved with Ron to Lagos, Nigeria. Their first child, Nancy Veronica, was born in Lagos the following year. Martha grew to love West Africa and she spoke fondly of time in Nigeria, and of visiting Liberia and Sierra Leone.

Plans to remain in Nigeria were interrupted by civil war, and a few months after Nancy was born they left Lagos and returned to the United States temporarily. After a short time spent in Bermuda they later settled in Hampshire, England, and their son David was born in Winchester in 1969. One of Mum’s favorite songs was “Winchester Cathedral” because it always reminded her of where David was born.

The following years found Martha back in the States with her family – residing in California, Colorado, and New Jersey, but in 1976 the family packed up and moved back to the United Kingdom, first in Ampthill, Bedfordshire, and then later to the village of Ringmer, Near Lewes, Sussex.

These were happy years, she loved the countryside of Sussex, and the South Downs, and she made many friends there. Martha and Ron divorced in 1984, however she chose to remain in Sussex, and made her home in Eastbourne, the lovely seaside town on the south coast. She met Laurie Phillips in 1990, while in Eastbourne, and they were devoted partners until his death in 2016.

In October, 2018, mum said goodbye to her much-loved home of Sussex and moved to Prescott to live with her daughter, son-in law and grandchildren. This was to be her last big trip. These last months were full of happy moments – time with her grandchildren, one last trip to Los Angeles for a family reunion, her son and daughter-in-law visiting from Japan, her brother and sister visiting from California.

Martha was beautiful, kind, and loyal, with a wicked sense of humor and she made many friends. It’s safe to say that anyone who met her grew to quickly love her, she just had that “something” that drew people in. We are heartbroken to have lost her but blessed to have loved, and to have been loved, by her.

Martha is preceded in death by her father Ray, her mother Josephine, her brother Richard, her brother Danny and her partner Laurie.

She is survived by her daughter, Nancy Veronica Aguilera (Hank); her son, David Ronchetti (Yumi); her grandchildren, Gabriella and Anthony Aguilera; her sister Irene Padilla; her brother, David Lara-Tellez; her sister-in-law, Eva Tellez; and numerous nieces, nephews and cousins.

The family would like to thank the staff of Austin House and Haven of Cottonwood, Arizona, for their loving care of Martha in her last weeks.

Thank you to Westcott Funeral Home, Cottonwood, for assistance with her final arrangements.

Services for Martha will be private, and then later, in accordance with her wishes, her ashes will be scattered over the South Downs in Sussex, England.