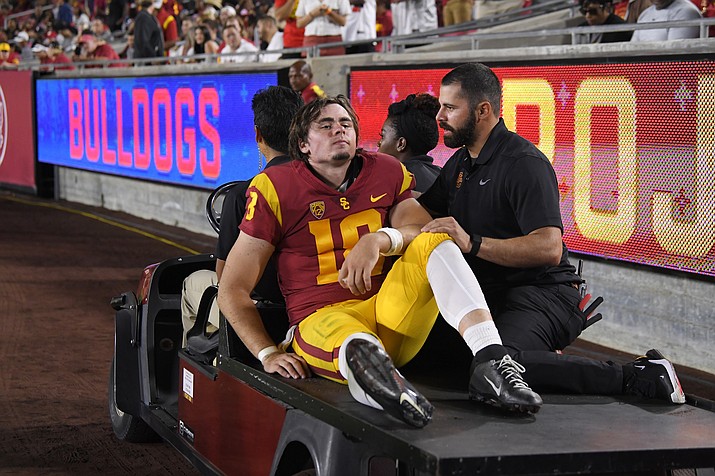 Southern California quarterback JT Daniels is carted off the field after being injured during the first half of a game against Fresno State Saturday, Aug. 31, 2019, in Los Angeles. (Mark J. Terrill/AP)

It's just a week into the season and injuries are already taking a toll in the Pac-12.

USC quarterback J.T. Daniels and Stanford counterpart K.J. Costello were among the players who got knocked out of their season openers. So did Washington senior center Nick Harris.

Graduate transfer Juwan Johnson, expected to start at receiver for Oregon, didn't even suit up for Saturday's big game against Auburn. And UCLA was missing several top playmakers.

Daniels' injury will arguably have the biggest impact on his team. The 6-foot-3 sophomore tore a ligament and the meniscus in his right knee late in the first half of the Trojans' 31-23 victory over Fresno State and will miss the rest of the season.

Daniels was adjusting this season to an Air Raid-style offense under new offensive coordinator Graham Harrell and had fared well in the opener before he was hurt, throwing for 215 yards and a touchdown.

Now USC (1-0) must turn to freshman quarterback Kedon Slovis. There's also the intriguing possibility that USC could lure back redshirt sophomore Jack Sears, who had announced last week his intention to enter the transfer portal after losing out to Daniels.

"One of the things that Jack and I always talked about, and I said, 'Hey, there is always an open door here,'" Helton said Saturday night. "And he told me, he said, 'Coach, if you ever need me, I'm there for you.'"

Slovis' debut as starter might come against another QB getting his first start, Stanford's Davis Mills. The Trojans host the Cardinal (1-0) on Saturday in an early conference matchup at the Coliseum.

Costello got a forearm to the facemask from Northwestern's Earnest Brown late in the first half Saturday. Costello, who threw for 152 yards and a touchdown before he was hurt, did not return. Brown was called for a late hit, but not targeting.

Shaw said Tuesday he believed the officials missed the call.

Mills, a junior, replaced Costello and threw for 81 yards, but he also fumbled twice and the Cardinal did not score in the second half. With the 17-7 victory, Stanford moved up two spots to No. 23 in the AP Top 25 released Tuesday.

Shaw, who had recruited Daniels, called the season-ending injury a shame. But he said it would not have too much impact on Stanford's preparation.

"Our defensive mentality is to accentuate what we do well and we talk a lot about our scheme versus their scheme, more so than who is playing quarterback," Shaw said. "The young man went in there last week and made some great throws and some nice plays, but for the most part for us we've got to go in there and play to our strengths and play our style of football."

Junior left tackle Walker Little injured his leg on the final drive of the game. Shaw said Stanford hopes to see Little back by midseason.

It was something of a surprise when Johnson was sidelined for the Ducks' season-opening 27-21 loss to Auburn.

Coach Mario Cristobal said Monday that the unspecified injury occurred late last week in practice and Johnson is currently listed as day-to-day. The Ducks were already hurting at receiver with Brenden Schooler (right foot) and Mycah Pittman (right shoulder) both out. Promising freshman receiver JR Waters will miss the season with a foot injury.

To help alleviate the situation, the Ducks have moved redshirt freshman tight end Spencer Webb to receiver. Webb had three catches for 28 yards and a touchdown in the opener.

"He played a lot of wide receiver or I would say a lot of detached tight end formational stuff in high school," Cristobal said. "So he's very natural in space. And when the opportunity arose with all of the injuries that transpired we felt, 'You know what, let's give this thing a look.'"

The Ducks also moved sophomore cornerback Daewood Davis to receiver. That's where Davis played his first year with the Ducks.

Oregon dropped from No. 11 to No. 16 following the loss to the Tigers. Next up, the Ducks (0-1) host Nevada (1-0) at Autzen Stadium on Saturday afternoon.

There's no word on Washington State standout linebacker Jahad Woods, who had six tackles against New Mexico State before he left the game in the third quarter with an apparent shoulder injury.

Because Cougars coach Mike Leach doesn't talk about injuries, it's unlikely his status will be updated. But Woods' backup, walk-on redshirt freshman Hank Pladson, filled in the rest of the way and had his first interception in the 58-7 Washington State win.

Howard, a senior who had a streak of 28 games with a reception going into the opener, was injured for much of training camp but had recently returned to practice, as had Kelley.

Coach Chip Kelly said afterward that the Bruins "made the decision we weren't going to put them out there if they weren't 100%. That wouldn't have been fair to the player and we're always going to err on the side of safety."

Harris was injured in the first half of the Huskies' 47-14 victory over Eastern Washington and did not return, but redshirt freshman backup Matteo Mele jumped right into the role.

Harris is week-to-week with an unspecified injury.

"You never know when that day is going to come where the guy's gotta go, so he (Mele) got a lot of good reps," coach Chris Petersen said. "Gotta keep progressing with him and Nick's week-to-week, and we'll go from there."

The Huskies (1-0) host California (1-0) on Saturday in another early conference game.